The Summerston distance stone from the Antonine Wall, which was found near Bearsden, was one artefact successfully tested for pigment. Photo: The Hunterian Museum / University of Glasgow

The 2nd century AD Antonine Wall in Scotland, the northernmost border wall built by the Ancient Romans, was painted in bright colors at least partly, an archaeologist from the University of Glasgow archaeologist has found.

The Roman Empire built the Antonine Wall to protect its province Britannia from the Caledonians between 142 AD and 154 AD, at the order of Roman Emperor Antonius Pius (r. 138 – 161 AD).

The Antonine Wall spanned a total of 63 kilometers (39 miles) through the central belt of Scotland, between the Firth of Forth and the Firth of Clyde.

It was about 3 meters (10 feet) high and 5 meters (16 feet) wide, and was built of stone, turf, and possible a palisade. The Romans abandoned it only 8 years after its completion.

In comparison, the more robust and more famous Hadrian’s Wall, which was built by the Romans to the south, was 117.5 kilometers (73 miles) long.

The Antonine Wall and Hadrian’s Wall in Roman Britannia can be compared with a similar border facility in today’s Bulgaria which was built by the First Bulgarian Empire somewhat later, in the Early Middle Ages.

Namely, the 8th – 9th century Erkesiya border wall or border rampart against the Byzantine Empire, which was 142 kilometers (88 miles) long, and combined a moat, earthwork, stone and wood structures, and hedges.

British archaeologist Louisa Campbell, using x-ray and laser technology on remnants of the Ancient Roman Antonine Wall, has shown parts of it were painted in bright colors, the University of Glasgow has announced.

Campbell’s research has demonstrated that parts of the wall on the Roman Empire’s most northwestern frontier was painted with vibrant red and yellows.

To reach this conclusion, she has looked at pigments applied to Roman sculpture, with a focus on distance stones from the Antonine Wall.

In her words, the vibrant colored stones of the Antonine Wall were Roman propaganda against the indigenous local communities.

“The public are accustomed to seeing these sculptures in bland greys, creams, white (for marble), and don’t get the full impact that they would have had on the Roman and indigenous audiences 2000 years ago,” she says.

“These sculptures are propaganda tools used by Rome to demonstrate their power over these and other indigenous groups, it helps the Empire control their frontiers and it has different meanings to different audiences,” the archaeologist adds.

According to Campbell, some of the color sculptures tell stories of different Ancient Roman legions and their loyalty to the Emperor as well as their part in the construction of the Antonine Wall, one of Scotland’s UNESCO World Heritage Sites. 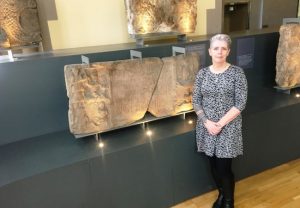 Archaeologist Louisa Campbell with the Summerston distance stone at The Hunterian Museum. Photo: University of Glasgow

“The distance stones tell us how many feet were built by each legion and are dedicating their allegiance to the Emperor Antoninus Pius. These sculptures are unique to the Antonine Wall and the best preserved example of frontier statuary from any Roman border,” she explains.

“They were embedded into prominent positions on the wall (probably crossing points at militarized forts) for full visual impact. The colors would have been a very powerful addition to bring these scenes to life and aid in the subjugation of the northern peoples,” the researcher elaborates.

Her project – Paints and Pigments In the Past (PPIP) is part funded by Historic Environment Scotland (HES)’s Archaeology Program.

The project has been designed to identify the colors of paint pigments applied to the sculptures from the Wall and then to recreate an authentic palette of colors to allow them to be physical and digitally reconstructed.

“We are delighted to have been able to fund Dr Campbell’s work and to see these exciting results emerge. Knowing how color was used by the Romans to tell stories and create impact is a huge leap forward in understanding these sculptures,” says Patricia Weeks, Antonine Wall Co-ordinator at HES.

“The information will now be used as part of our partnership ‘Rediscovering the Antonine Wall’ Heritage Lottery Fund bid to propose a recreated distance slab in full color. We will also work on innovative digital methods of recreating the stones in colour that can be used for interpretation both out on the original find sites, and in the galleries at the Hunterian Museum,” she adds.

Most of the examples available were discovered between the 17th and 19th centuries, and are on display at the University’s Hunterian Museum.

“Many contain exquisitely carved scenes of combat, religious practice and architecture. It is likely that the sculptures were originally painted for maximum impact. However, over the course of time the paint has faded and only trace elements are left,” Campbell notes.

“It has been an incredibly exciting opportunity to work with the Hunterian collections and use cutting-edge scientific instruments to undertake non-destructive analysis of important cultural objects,” she adds.

As well as The Hunterian, Campbell has also visited other collections for sampling, including the National Museum of Scotland in Edinburgh, the Yorkshire Museum in York, and the Great North Museum in Newcastle upon Tyne.

Using non non-destructive in-situ analysis using pXRF (portable X-Ray Flourescence) and Raman Spectroscopic analysis, for the first time she has been able to look at archaeological remnants that have been subjected to environmental process which have impacted the survival of viable samples. However, the work has confirmed polychromy on these sculptures and a restricted palette dominated by reds and yellows is evidenced.

There is a clear format to the application of pigments in the Roman Empire with specific colors expected to appear in certain contexts, e.g.reds in letters and Roman cloaks and military standards, different colors of red depicting spilled blood of indigenous captive warriors and ochres probably applied in layers to provide life-like skin tones, as evidenced on marble statuary.

There is even evidence for red on the beak of the Roman eagle which Campbell suggests symbolizes the eagle feasting on the flesh of her enemies.

A base layer of gesso was applied to the stones in the first instance which was then painted onto, but conservation practices appear to have negatively impacted the survival of these exquisite sculptures.

The University of Glasgow points out that that is innovative work that has not previously been attempted.

The next phase of the research seeks to determine whether other stone statuary, including Pictish symbol stones and other early medieval sculpture was adorned in color.