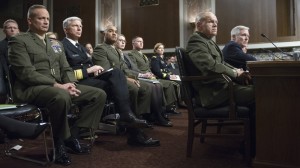 This is interesting and I think probably fair.  Two women recently complete Army Ranger training and became the first women to do so.  Women have been fighting for equal inclusion in the military on all fronts, up to and including the battlefront.  It only seems to make sense that they would be subject to the same draft registration requirements as men.

How could this work for two-parent families?  Well, if both receive a draft notice, then only one should be held to it.  They could decide which between themselves.  What about single mothers?  They should be treated as equally as single fathers – they can be drafted if the father is not drafted and can care for the children.  Then of course he couldn’t be drafted.  If there is no other parent in the picture (separated or divorced), then just as with single fathers in the same situation they would be exempt.

It does seem fair that women would be held to the same requirements as men, and given the same exemptions, in a society that is working toward equality.  You may say, “But not all women are fighting for that and hold to a 50’s-style mentality.”  Hey, there are plenty of men who are pacifists and don’t wish to fight, yet that doesn’t work.

I don’t know where I stand on this, but it is an interesting discussion and one that will have to be had.