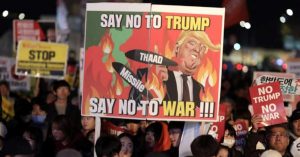 “We and our nation cannot abide being hostages to the mood swings of a petulant and foolish commander-in-chief.”

In an open letter to Congress on Thursday, 17 “former stewards of the launch keys” blasted President Donald Trump’s repeated threats to use nuclear weapons and urged lawmakers to take action to curtail his authority.

“The president has had ample opportunity to educate and humble himself to the grave responsibilities of his office,” the missileers’ letter states. “Instead, he consistently shows himself to be easily baited, stubborn in his ignorance of world politics and diplomacy, and quick to brandish nuclear threats.”

“Donald Trump is the last person who should possess the nuclear codes and the power to start a nuclear conflagration,” said Bruce Blair, a signatory to the letter (below) and co-founder of the Global Zero movement to eliminate nuclear weapons.

“As a former steward of the nuclear launch keys, I’ve learned about the stability, competence, and temperament it takes to hold such a responsibility,” Blair added, “and Donald Trump has shown us all he possesses none of those qualities.”

This warning from 17 former missileers comes amid alarming reports that the Trump administration is working to loosen constraints on nuclear weapons use in the Pentagon’s forthcoming Nuclear Posture Review, and considering a “bloody nose” strike against North Korea that experts worry could provoke a nuclear war.

Trump and North Korean leader Kim Jong Un have engaged in a long and hostile series of public spats that have prominently featured threats to launch nuclear weapons—most recently, over the New Year, when the two men argued over the size and power of their “nuclear buttons.”

“Every one of these episodes points to a flaw in the nuclear launch process that poses a clear and present danger to the country and the world: Every American president has absolute authority to order the first use of nuclear weapons,” the letter explains. “No one—not the secretary of defense, not the attorney general, not Congress—can veto that order.”

There are currently multiple proposals in front on Congress that would rein in the president’s nuclear power, and “all are backed by top experts and worthy of consideration,” the letter notes.”Whether it’s assigning the defense secretary and attorney general a role in certifying a launch order, requiring a Congressional Declaration of War before the first use of nuclear weapons, or ending the policy of nuclear first use entirely, any of these common-sense measures would reduce the risk we now face.”

“We and our nation cannot abide being hostages to the mood swings of a petulant and foolish commander-in-chief,” the letter concludes. “No individual, especially Donald Trump, should hold the absolute power to destroy nations.”