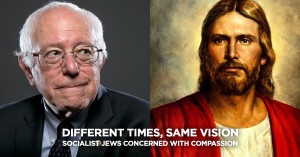 Christian Chiakutas is right on target with the HuffPost Religion article (“The Christian Left Feels the Bern”).  It is beyond me why any Evangelical would even think of voting for anyone other than Sanders.  They are constantly speaking to following the words and example of Jesus, and they never hesitate to say – as evidenced lately by various Republican candidates – that they put Jesus before country.  Yet their allegiance wanes when expecting them to literally believe that runs contrary to their political views.  Many are shocked that there is such as the “Christian Left”, and even more shocked that the left is where they all ought to be.

The meme above has been making the social media rounds with good reason.  It calls them to be what they claim to be and expects them to want the government to promote the ideals of the God they claim to be above it.  It’s contradictory to want same-sex marriage to be outlawed while simultaneously not wanting the government to provide healthcare for all.  The former expresses a wish to see government enact their beliefs while the latter sees them shunting aside their beliefs and claiming that it’s not the government’s job.  They can’t have it both ways.

I’m not comparing Sanders to Jesus here as a person, but it’s not difficult to see a similarity in beliefs.  The difference between Jewish Sanders and many Christians is that he is actually willing to take action to make those beliefs a reality.  He has compassion and believes that no one should be without healthcare as a right and that the financial elite shouldn’t be able to take advantage of their wealth and not pay their fair share.  Jesus would require them to do much more.  They would walk away before dropping their wealth and following him, as the man in the Bible did.

If you are a Christian and believe you should promote that which would most closely align with Jesus, then be one.  Don’t insult him by paying lip service to his example without actually following it.  I know, it’s a dilemma for you.  You have to try to follow that example while still honoring the highest law in the land even when it does not conform to your belief system.  You don’t get to say, “We will only show that compassion when same-sex marriage is outlawed.”

You don’t get to say it because He wouldn’t let you.