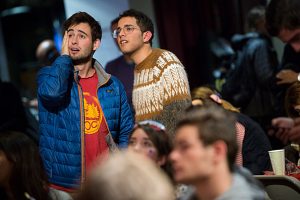 A new IOP poll of voters under 30 found that just 14 percent of young Americans believe the nation is generally headed in the right direction. / Filel photo by Stephanie Mitchell/Harvard Staff Photographer

new national poll of 18- to 29-year-olds by the Institute of Politics (IOP) at Harvard Kennedy School found that two-thirds of young Americans are more fearful than hopeful about the nation’s future.

At this point, 11 months before the midterm congressional elections, likely young voters cited a preference for Democratic control of Congress, 65 to 33 percent.

The fall poll, the IOP’s 34th major public opinion survey since 2000, also found a decline in President Trump’s approval ratings, heightened concern about the state of race relations in the country, and increased support for stricter gun control laws.

“American political institutions are at a tipping point,” said John Della Volpe, polling director at the IOP. “Millennials are now the largest generation in the electorate. This poll and the Virginia election show that they are becoming more motivated — and I believe the fear that exists today about our future will soon be turned into the fuel that will reform our government. The only question is whether this comes from inside or outside the traditional party structure.”

The poll of 2,037 young adults, which was organized with undergraduate students from the Harvard Public Opinion Project, was conducted between Oct. 31 and Nov. 10. The margin of error for is +/- 3.05 percentage points at the 95 percent confidence level.

Originally published by the Harvard Gazette.