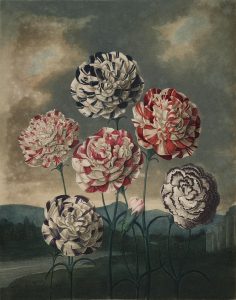 “A Group of Carnations”, a plate from Robert Thornton’s Temple of Flora (1807) — Internet Archive 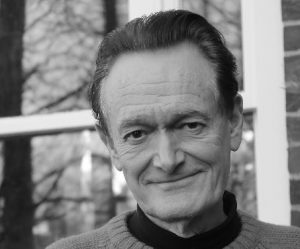 This article, Sex and Science in Robert Thornton’s Temple of Flora, was originally published in The Public Domain Review under a Creative Commons Attribution-ShareAlike 3.0. If you wish to reuse it please see: https://publicdomainreview.org/legal/

For centuries the study of flowers and the cultivation of gardens were deemed to be safe pursuits for genteel young ladies – providing they did not aspire to become professional botanists. The behaviour of animals, by contrast, was all too likely to provoke difficult questions. Carl Linnaeus’ sexual system for the classification of plants, based on stamens and pistils and expressed in overtly sexual terms, changed all that. By doing so, he played a key role in the founding of what can be described as “Romantic Science”, in which detailed empirical analysis is allied to fervent evocations of dynamic nature in action.

We now associate the great Swedish botanist with the dry taxonomy of his binomial system of classification. He supplied enduring names for many genuses and species of plants. We are not surprised to find the initial letter “L” or the abbreviation “Linn” after the Latin name for the shrubby blackberry, Rubus fruticosus — denoting that it was named by him. The tone of his actual texts is very different. His system was sexual in theory and practice:

The flower’s leaves … serve as bridal beds which the creator has so gloriously arranged … and perfumed with so many soft scents that the bridegroom with his bride might there celebrate their nuptials with so much greater solemnity. When now the bed is so prepared, it is time for the bridegroom to embrace his beloved bride and offer her his gifts.

Introduced to a worldwide readership in his Philosophia Botanica of 1751, Linnaeus’ principles attracted fervent adherents and keen opposition. Among the devotees was Erasmus Darwin, Charles’ grandfather, who was an enthusiast of the French Revolution and adopted a radically libertarian stance on social matters. Erasmus’ scientific poem, The Loves of Plants, published in 1789 as part II of The Botanic Garden, blends sober scientific analysis with poetic rapture, the latter typified by his evocation of the polygamy practised by the lily Gloriosa superba:

Proud Gloriosa led by three chosen swains,
The blushing captives of her virgin chains …
When time’s rude hand a bark of wrinkles spread
Round her limbs, and silver’d o’er her head,
Three other youths her riper years engage,
The flatter’d victims of her wily age. 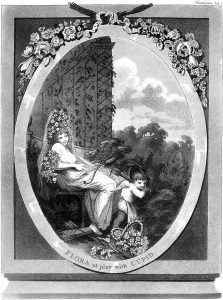 Flora at play with Cupid — frontispiece to The Loves of Plants, the second part of Erasmus Darwin’s The Botanic Garden(1789) — Wellcome Library

Unsurprisingly, religious and conservative organisations began to express alarm. Most notably, the Encyclopaedia Britannica, published from the Calvinist redoubts of Edinburgh in 1768, railed against the “disgusting strokes of obscenity” with which Linnaeus had disfigured the picture of nature’s innocent beauties.

Even the radical French philosopher Jean-Jacques Rousseau, who was an enthusiastic advocate of the new system, felt it prudent to warn Mme Delessert in his botanical letters that her young daughter should only be inducted into the secrets of stamens, pistils, and such-like “by degrees, no more than is suitable to her age and sex”.

The illustrated book that best captures the tone of Darwinian rapture is Robert Thornton’s majestic but financially disastrous enterprise, A New Illustration of the Sexual System of Linnaeus, first advertised to subscribers in 1797 and appearing in parts from 1799. The illustrations ranged from tabular and diagrammatic representations of Linnaeus’ system, to romantic pictures of particular plants in evocative landscapes and highly charged allegories of nature. For example, the Strelitzia reginae or “queen plant” (named after Charlotte of Mecklenburg-Strelitz, George III’s queen), is soberly anatomized in one plate, depicted in an exotic setting in another, and features as the target of Cupid’s arrow in the allegorical image of “Cupid inspiring the plants with love” from the pictorial part of the New Illustration — re-titled in 1804 as The Temple of Flora. 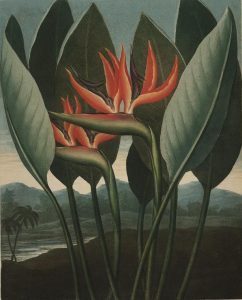 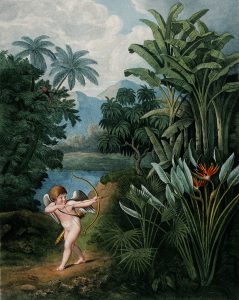 However, lest we should think that Queen Charlotte was being encouraged to distribute her favours with Darwinian profligacy, Thornton is at pains to eulogize the royal patron of his enterprise as a “bright example of conjugal fidelity and maternal tenderness”. Unshakably pious, staunchly monarchist, and very English, Thornton would have nothing to do with Erasmus Darwin’s dangerously French attitudes.

His pious intentions do not stop him from presenting highly-wrought accounts of the personalities of plants in the great spectrum of the book of nature. There are sweet delights, like those of the sensitive plant:

Secreting honey, it gives a delightful food to the humming bird, and Nature has been so anxious for the preservation of this tribe, that besides multiplying the number of males (stamina) to one pistillum or female, there are also several of its flowers which possess only a cluster of males.

Other plants convey dreadful warnings, none more lurid than that of the dragon arum:

SHE comes peeping from her purple crest with mischief fraught: from her green covert projects a horrid spear of darkest jet, which she brandishes aloft: issuing from her nostrils flies a noisome vapour, infecting the ambient air: her hundred arms are interspersed with white, as in the garments of the inquisition; and on her swollen trunk are observed the speckles of a mighty dragon; her sex is strangely intermingled with the opposite ! confusion dire ! -all framed for horror; or kind to warn the traveller that her fruits are poison-berries, grateful to the sight but fatal to the taste; such is the plan of PROVIDENCE, and such HER wise resolves. 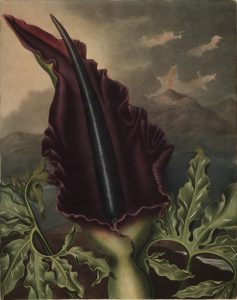 “The Dragon Arum”, a plate from Robert Thornton’s Temple of Flora (1807). Note the depiction in the distance of a volcano mid-spurt – Internet Archive

Alongside these overt messages, Thornton argued that the mathematical, logical character of taxonomy was a “noble exercise” which was eminently suitable for the training of the minds of the young, who are all too easily seduced by pastimes that “inflame the passions”. By stressing the dispassionate character of classification, he was consciously confronting the accusation that the sexual basis of Linnaeus’ method was an obscene perversion of the innocence of plants that besmirched botany as a study unfit for young ladies.

Thornton was determined that the Linnaean binomial system should serve as the taxonomic science of the flower bed and not as a justification for abandoning the proper regulation of the human nuptial chamber. However, reading his fervent accounts of the sexual mores of individual plants, we might conclude that he was having it both ways.

New Illustration of the Sexual System of Carolus von Linnaeus and The Temple of Flora, or Garden of Nature (1807), by Robert Thornton

The Botanic Garden, a Poem in Two Parts (1807), by Erasmus Darwin