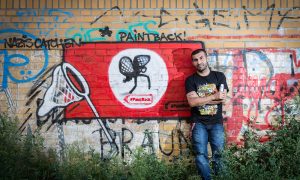 Ibo Omari, founder of the #PaintBack Project, transforms swastikas, which are illegal in Germany. The first one in 2015 was transformed into a mosquito flying away from a net. / Photo by Thielker/Ullstein Bild/Getty Images.

The #PaintBack Project combats the spread of racism and bigotry with art.

Public spaces are for everyone, but how we perceive them and interact with them is contextual. Some activists are making statements on public canvas all around the world. And it’s catching on.

In 2015, a concerned father came into Berlin street artist Ibo Omari’s shop, asking for a couple of cans of spray paint to cover up a swastika that was painted on a children’s playground. Two weeks later, another swastika appeared nearby.

The son of Lebanese immigrants, Omari felt personally affected by the images, considering the rise of Germany’s far-right political party in recent years. To combat the spread of racism and hate in his community, Omari started the #PaintBack Project.

#PaintBack! [Guerrilla artists are transforming sw*st*k*s on the street into clever works of activist art]

“We represent hip-hop culture, and graffiti is a part of hip-hop culture,” Omari says. “We wanted to make the separation between a tag and a hateful message being spread with a spray can.”

With the help of other street artists and members of his nonprofit, Die Kulturellen Erben, or “The Cultural Heirs,” Omari has been transforming the swastikas, which are illegal in Germany, into art. The first swastika Omari came across in 2015 was transformed into a mosquito flying away from a net.

“Mosquitos, they have a right to exist,” Omari says.