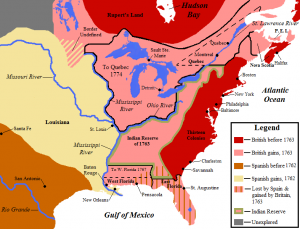 The Treaty of Paris of 1763 ended the French and Indian War/Seven Years’ War between Great Britain and France, as well as their respective allies. In the terms of the treaty, France gave up all its territories in mainland North America, effectively ending any foreign military threat to the British colonies there.  The French would hold this grudge, especially of its loss of Canadian territory, and make amends for it when joining the Americans to win the Revolutionary War.

During the war, British forces had scored important overseas victories against France: not only had the British conquered French Canada, they also won victories in India, and captured French island colonies in the Caribbean. In March of 1762, French King Louis XV issued a formal call for peace talks.

The British Government was also interested in ending the war. The Seven Years’ War had been enormously expensive, and the Government had to finance the war with debt. Creditors were beginning to doubt Great Britain’s ability to pay back the loans it had floated on financial markets. In addition, British King George II had died in 1760, and his successor George III was more amenable to ending the war.

Initial attempts at negotiating a peace settlement failed, and instead French and Spanish diplomats signed the Family Compact, a treaty that brought Spain into the war against Britain. British Prime Minister Lord Bute continued secret and informal talks with French diplomat Étienne-François de Stainville, duc de Choiseul, and they came to an unofficial agreement in June, 1762. Bute promised fairly generous terms, and the two countries agreed to an exchange of ambassadors in September.

By the time the formal negotiations began, the situation had changed. News had reached Europe of the British capture of Havana, and with it the Spanish colony of Cuba. Spanish King Charles III refused to agree to a treaty that would require Spain to cede Cuba, but the British Parliament would never ratify a treaty that did not reflect British territorial gains made during the war.

Facing this dilemma, French negotiator Choiseul proposed a solution that redistributed American territory between France, Spain and Great Britain. Under Choiseul’s plan, Britain would gain all French territory east of the Mississippi, while Spain would retain Cuba in exchange for handing Florida over to Great Britain. French territories west of the Mississippi would become Spanish, along with the port of New Orleans. In return for these cessions, along with territory in India, Africa, and the Mediterranean island of Minorca, France would regain the Caribbean islands that British forces had captured during the war. The British Government also promised to allow French Canadians to freely practice Catholicism and provided for French fishing rights off Newfoundland.

Choiseul preferred to keep the small Caribbean islands of Martinique, Guadeloupe, and St. Lucia rather than hold on to the vast territory stretching from Louisiana to Canada. This decision was motivated by the fact that the islands’ sugar industry was enormously profitable. In contrast, Canada had been a drain on the French treasury. The loss of Canada, while lamentable to French officials, made sense from a mercantile perspective.

The diplomats completed their negotiations and signed the preliminary Treaty of Paris on November 3, 1762. Spanish and French negotiators also signed the Treaty of San Ildefonso at the same time, which confirmed the cession of French Louisiana to Spain.

Although British King George III and his ministers were in favor of the treaty, it was unpopular with the British public. However, the treaty contained enough concessions to war hawks that the British Parliament ratified the Treaty of Paris by a majority of 319 to 64, and the treaty went into effect on February 10, 1763.

For Anglo-American colonists, the treaty was a theoretical success. By confirming the conquest of Canada and extending British possessions to the Mississippi, the colonists no longer had to worry about the threat of a French invasion. For the American Indians in what had been frontier territory, the treaty proved disastrous. They could no longer pursue what had been a largely effective strategy of playing the French and British against each other to extract the most favorable terms of alliance and preserve their lands against encroachment by Anglo-American colonists.

Despite what seemed like a success, the Treaty of Paris ultimately encouraged dissension between Anglo-American colonists and the British Government because their interests in North America no longer coincided. The British Government no longer wanted to maintain an expensive military presence, and its attempts to manage a post-treaty frontier policy that would balance colonists’ and Indians’ interests would prove ineffective and even counterproductive. Coupled with differences between the imperial government and colonists on how to levy taxes to pay for debts on wartime expenses, the Treaty of Paris ultimately set the colonists on the path towards seeking independence, even as it seemed to make the British Empire stronger than ever. (see Parliamentary Taxation of Colonies).