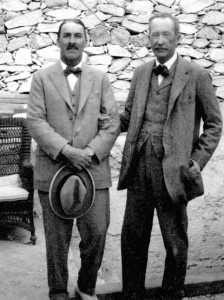 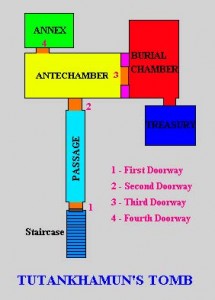 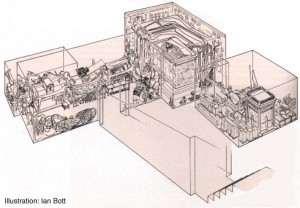 On this date in 1923,  Howard Carter and Lord Carnarvon opened Tutankhamun’s tomb.  Carter was an Egyptologist funded by Carnarvon in his search and excavation.  Carter actually discovered the tomb in 1922 but had to wait until the following year for Carnarvon to arrive.  The tomb was robbed only twice soon after his death, and then not much was taken. Priests had left an inventory of items placed in the tomb, most of which were still there. The robbers were caught in the act and bundles were still in the passageway when it was discovered that they had dropped when captured and taken away. They were punished by being impaled, and court records remain with their names.

The discovery became an instant sensation. The tomb was found packed floor to ceiling with pharaohnic objects. There were other passageways as well. Carter was also a businessman and made an exclusive deal with the New York Times to access and photograph the tomb, blocking out other reporters.

Many wheels were in the tomb from chariots, boxes filled with jewelry, clothing, etc. The body was inside a coffin with a Russian doll configuration – larger to smaller to smaller. It took ten years to excavate the tomb. Two other mummies – a child and a still-born fetus – were in the tomb as well. These were his daughters. When Tut married his wife, they were both teenagers and were encouraged to quickly have children for the sake of succession.

Because Carter had only granted access to the New York Times, other reporters were looking for some story – so they made one up.  Carnarvon, the man who bankrolled Carter’s search and excavation, died in Egypt in early April 1923. The reporters then created the “curse of King Tut’s tomb.” They were angry, bored and needed to sell papers, and people would eagerly buy this sort of thing. Carnarvon’s death only a year after opening the tomb must have been the result of Tut’s getting revenge for his sleep being disturbed and his tomb pilfered. Of course many were skeptical, but reporter’s invented a curse Tut supposedly laid on anyone entering his tomb. An article was written citing Arthur Conan Doyle as stating that death by evil spirits was possible. This was the man who created Sherlock Holmes. If Doyle said it, then it must be true! Doyle actually believed in fairies and magic, so this wasn’t a stretch for him.

People have gone back to create a list of those who worked on the excavation and when they died and claimed many did not live as long as most people. Records actually show most of them living longer and fuller lives than was average for people at that time! But we still see articles like the grandson of one of the photographers during the excavation died young and relate it to the “curse.” When Tut’s artifacts were put on display in California, one of the guards had a heart attack and this was of course attributed to the “curse.”