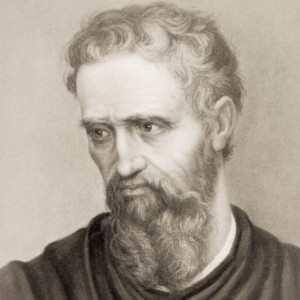 Michelangelo was primarily an artist. He claimed never to have practiced architecture, but he actually did a lot. He is most known for the ceiling in the Sistine Chapel, and on the opposite end a painting of the Last Judgment. He was primarily known as a sculptor. In a way, his claim to never have practiced architecture was true. He sculpted or carved space. For him, architecture was organic and dynamic and based on intuition, not necessarily on mathematical systems and formulas. He was one of few, maybe the only, who challenged Alberti’s 15th century proposals. His spaces are highly psychologically charged – the antithesis of the others.

Michelangelo was self-taught. He never apprenticed with anyone. He saw architecture as he saw the human body.  He had a completely different attitude toward proportion and scale. 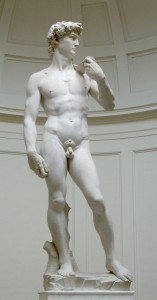 David (images above and below) was sculpted between 1501 and 1504 CE, scaled to architectural size – urban rather than human scale.  He shows David nude, and of course no one goes to war like this. He follows Classical tradition and equates the style with that of Apollo.  His figure is composed in the Classical contrapposto stance. The arms and legs are not symmetrical as in the Vitruvian Man. He doesn’t used a fixed geometric space.  He uses very large features. The proportions are slightly off and exaggerated. The face – the gaze – is pensive. The look is distant. We don’t know exactly what he’s thinking, which was Michelangelo’s intention. It’s not clear what David is going to do. Michelangelo was interested in human emotions and the process of decision-making – how the mind could affect the body and perception. 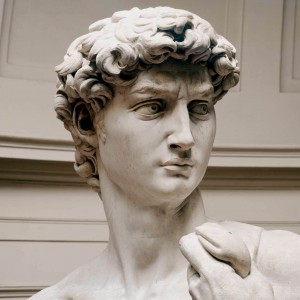