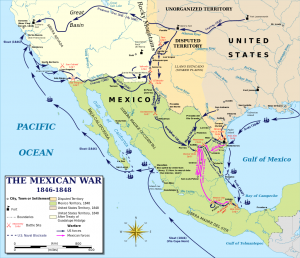 On this date in history, the Treaty of Guadalupe Hidalgo officially brought the Mexican War (1846-1848) to an end during the presidency of James K. Polk.  Polk was well-known for his strenuous belief in “manifest destiny” to expand across the country to the Pacific Ocean.  In fact, Polk offered to purchase lands earlier but was denied.  He decided to pick a fight by sending troops to occupy disputed land between the Rio Grande and the Nueces River.  The rest, as they say, is history.

As part of the treaty, Mexico ceded portions of land to the United States for $15,000,000.  This land included portions of Texas (already having gained its independence in 1836), New Mexico, Nevada, Utah, Arizona, California and parts of Colorado and Wyoming.