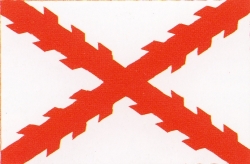 From Jonathan R. Dull, The French Navy and American Independence: A Study of Arms and Diplomacy, 1774-1787 (Princeton University Press, 1975):

“While both Spain and France sought to reduce England’s substantial power, the two countries had different priorities as to particular geographical objectives. Spain was most interested in regaining Gibraltar and the island of Minorca (lost at the Treaty of Utrecht). Spain had significant holdings in the Western Hemisphere (South and Central America, Mexico, Caribbean area, and Louisiana territory that France had transferred to Spain just before the relinquishing Canada [but not fishing rights off Newfoundland] in the 1763 Treaty of Paris.”

“As the American rebellion began to erupt in 1776, Spain’s interest in the Western Hemisphere was largely defensive and leery of encroachment by the British American colonists as much as by European powers. France had a much higher priority in protecting the few, but most valuable, fishing areas off of Newfoundland as well as some very lucrative West Indian islands, both of which French leaders feared were vulnerable to renewed aggression by British colonists in North America supported with the mighty British navy. In other words, Spain’s strategic focus was more European centered, and France perceived a vested interest in separating Great Britain from its main north American colonies. “