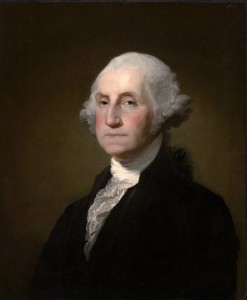 On this date in both 1789 and 1792, George Washington was the first and only person to be elected President of the United States by a unanimous vote in the electoral college.  Washington was massively popular and very likely could have led the creation of a constitutional monarchy.  Indeed, there was one point at which his army wanted him to invade the capital and take dictatorial control.  He declined both opportunities in pursuit with others to create the great experiment of our constitutional representative republic.

Washington’s character and his loyalty to the new country he was fighting for shone during the Newburgh Conspiracy in New York in 1782.  His Continental Army was in upset and ready to turn their arms against the Continental Congress.  Soldiers had been promised half-pay pensions for life in 1780 when there was nearly a mass exodus of them from the fighting.  They had been spending their own money on supplies and even arms and needed some assurance that they could return home to care for their families already financially behind due to the personal costs of the fight for independence.  The problem in 1782 was that Congress literally did not have the money to pay them.  Along with Henry Knox and Horatio Gates, two other generals, Washington sent a letter to Congress in which they stated on behalf of their soldiers, “We have borne all that men can bear.”  Gates actually led what he hoped would be a coup to supplant Washington, who was trying to negotiate with Congress, and continue to a military takeover of Congress with himself at the helm.  Gates, in direct insubordination, called for a meeting of soldiers on a hill in a building Washington named the “Temple of Virtue”, but Washington simply released a letter to the soldiers granting permission for the meeting instead of calling Gates to discipline.  He had his own plan in mind.

As all the officers gathered for the meeting, Washington unexpectedly walked through the door and to the front.  He stood in front of them and pulled his spectacles from his pocket to put them on – he had never been seen in public wearing them.  This was a brilliant move as he began to speak, “I too have grown gray in the service of my country and I too am going blind.”  Exhorting them to stay the course fighting for the common goal of independence, he concluded his address with:

“You will give one more distinguished proof of unexampled patriotism and patient virtue, rising superior to the pressure of the most complicated sufferings; And you will, by the dignity of your Conduct, afford occasion for Posterity to say, when speaking of the glorious example you have exhibited to Mankind, ‘had this day been wanting, the World had never seen the last stage of perfection to which human nature is capable of attaining.'”

As he finished and walked out of the room, all in attendance applauded this man who had bared his age and equal weariness before them.  The subversion Gates had planned immediately fell away.  At the end of the war, Washington formally surrendered his sword to Congress in a symbolic exercise – there would be no military takeover or dictatorial control.  The people would control the army, not the other way around.