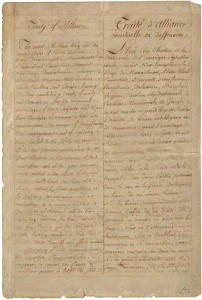 On February 6, 1778, the Bourbon Monarchy of France signed two treaties of alliance with the revolutionary American colonists.  The Treaty of Amity and Commerce recognized the United States of America as an independent nation and granted France “most favored nation” status in matters of trade.  The Treaty of Alliance formed a military union in declaration of war against Great Britain and that no peace treaty would be signed with England that did not recognize America as an independent nation.  That treaty also specified that France had the right to conquer the West Indies held by the British.

While France did admire the ideals espoused by revolutionaries, they were also holding onto a grudge against the British who conquered them in their North American empire.  They had been itching for a fight, and here was the opportunity.

Without the French, whose assistance assured victory at the Battle of Yorktown in October 1781, the American War for Independence would very likely have been lost.  They were our first and unarguably most decisive allies.  The treaties of alliance were ratified by the Continental Congress in May 1778 in the wisest move they made.