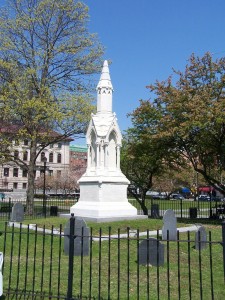 On this date in 1777, Timothy Bigelow, a Major in the Revolutionary War, became the Colonel of the 15th Massachusetts Colonial Line of the Continental Army.

Bigelow, born in Worcester, Massachusetts, was a blacksmith by trade.  He gathered a group of Minutemen to go to Cambridge after learning of the conflict in Lexington.  He marched in the bitter cold with Benedict Arnold to Canada and was captured by the British at the Battle of Quebec in December 1775.  He was held until August 1776.

Following his promotion, Bigelow distinguished himself as a combat leader in several important battles.  However, in spite of a shining career, he became financially indebted upon returning home to Worcester.  He was imprisoned for those debts and died there on March 31, 1790.

There stands a monument to Bigelow in Worcester today at the Worcester Common.