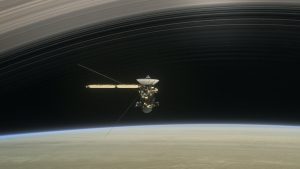 An illustration of Cassini diving between Saturn and the planet’s innermost ring. NASA/JPL-Caltech

The Cassini space probe mission came to an end this month when the probe made its final destructive plunge in to Saturn. It spent the past thirteen years studying the planet, its rings and moons in unprecedented detail.

Cassini wasn’t the first NASA probe to study Saturn close-up. Pioneer 11 (1979), Voyager 1(1980) and Voyager 2 (1981) had flown by Saturn earlier, not stopping but giving us the opportunity to see the planet as the amazing world that it is. 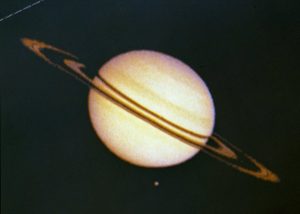 Pioneer 11 was the first spacecraft to fly by Saturn, September 1, 1979. NASA Ames

But to really understand a planet, you need to spend time with it and that’s what Cassini has done.

Launched in 1997, it took almost seven years to reach Saturn, entering orbit on July 1, 2004. On Christmas Day that year, the Huygens probe was released towards Titan, the first probe ever to land on an object in the outer Solar System.

Cassini was on a four year mission to explore Saturn, its atmosphere, magnetosphere, rings and to study Saturn’s moons, especially Titan the only moon in the Solar System to have a substantial atmosphere.

Time goes by and seasons change

But four years has quickly grown into 13 impressive years, allowing Cassini to watch the slow progression of Saturn’s changing seasons. 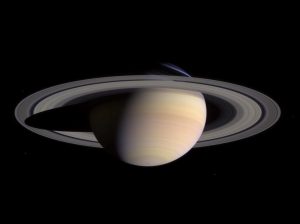 The colours of Saturn’s seasons: clear winter blue in the north, smoggy summer yellow in the south. NASA/JPL/Space Science Institute

When the spacecraft arrived, Saturn’s northern hemisphere was in the dark of winter.

The northern part of Saturn was a mesmerising blue. Less sunlight, particularly the Sun’s harsh ultraviolet rays, could reach the north leaving the atmosphere clear of smog and giving rise to the beautiful blue scattered light. 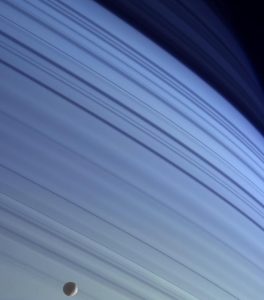 The icy moon Mimas passes in front of the clear blue sky of winter at Saturn. NASA/JPL/Space Science Institute

In August 2009, Cassini had the opportunity to view Saturn at equinox, a special time when the Sun sits directly in line with the planet’s rings. The only light hitting the rings is reflected light from Saturn itself. 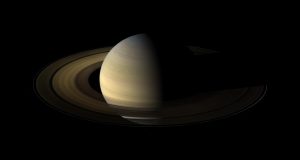 The first time we’ve seen a close up view of Saturn at equinox. The rings have been artificially brightened to bring them into view. NASA/JPL/Space Science Institute

During this time shadows were seen dancing across the rings. On average, the rings are very thin, just ten metres or so in thickness, and each of the rings and gaps in the rings have a special name.

At the edge of Saturn’s B ring, the equinox shadows revealed structures that towered as high as 2.5 kilometres. Quite possibly, small moonlets are splashing the ring particles about and forcing them upwards as the moonlets pass by. 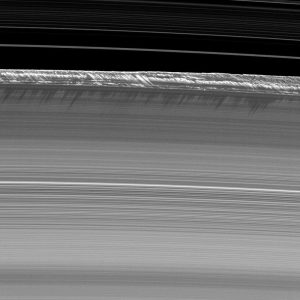 As Cassini’s mission came to an end, summer has arrived at Saturn’s north. The colours are changing and right at the top of Saturn’s north pole, it’s possible to see the distinctive hexagon – a six-sided weather pattern that is now bathed in sunlight. 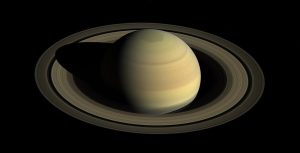 Cassini spent half a Saturn year in orbit watching the slow progression of the seasons. NASA/JPL-Caltech/Space Science Institute

Embedded in the heart of the hexagon is a roaring hurricane, 50 times larger than any hurricane experienced on Earth. Simulations suggest that it is produced by a jet stream curving around Saturn’s north pole and being jostled about as it interacts with other air currents.

Whatever established the hexagon, it’s certainly long-lived. The pattern was first recorded by the Voyager spacecraft in 1980, although it was not discovered in the data until eight years later.

The Hubble Space Telescope has captured strong aurora on Saturn at ultraviolet wavelengths. But for the first time, Cassini showed us Saturn’s northern and southern lights shimmering above the planet in visible light.

Unlike Earth’s aurora which are predominantly green and blue due to the oxygen and nitrogen in our atmosphere, Saturn’s aurora vary from pink to purple as charged particles collide and excite the hydrogen-rich atmosphere.

The auroras over Saturn.

The Cassini mission has been a fantastic international achievement made possible via NASA and the European Space Agency (ESA).

It has involved 17 countries, 260 scientists plus thousands more who worked to design, build and launch the spacecraft.

Team members who have spent their careers working on the Cassini mission reflect on the epic journey. So farewell Cassini, what an amazing time it’s been.