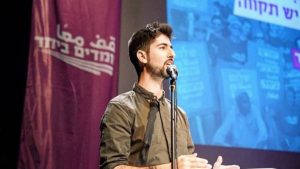 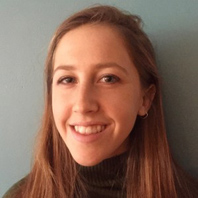 On Feb. 24, 2018, over 20,000 people gathered in the streets of South Tel Aviv to protest Israel’s planned deportation of thousands of African asylum seekers starting in April. The mass protest brought together African refugees and Israelis of many backgrounds. One of the principal leaders responsible for this feat of unity was 30-year-old Tel Avivian Alon-Lee Green, a seasoned political organizer and co-founder of the Standing Together (Omdim B’Yachad) movement. He became well-known in Israel as one of the young leaders of the massive social justice protests of the summer of 2011—which, at its peak, brought half a million people to the streets—but his journey as an activist started much earlier. Four days after the anti-deportation demonstration, Green spoke with the American Jewish Peace Archive about the story of his activism—including his views on grassroots organizing, the importance of making a connection between domestic issues and the occupation, and the potential for Jewish-Arab cooperation to create political change within Israeli society.

Green was born in 1988 and has lived nearly all of his life near Rabin Square in Central Tel Aviv, where he also co-owns the Brothers Green bookshop with his twin brother, Ellie. He grew up in a single-parent home with his mother and grandmother, an immigrant from Bulgaria. (Green is of Bulgarian-Turkish and Ashkenazi descent.) He first ventured into politics at sixteen, when he joined the Young Communist League of Israel, a Jewish-Arab political youth movement. There, he found a home that allowed him to mature personally and politically and to learn in-depth about the occupation for the first time. (The Israeli Communist Party has since 1947 been a steadfast supporter of the two-state solution.) “It was a group of weird kids that allowed me to bloom,” Green said. 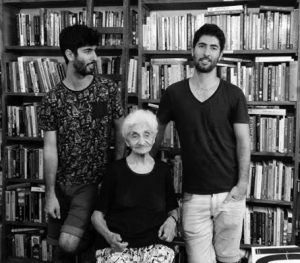 In 2006, Green was one of 100 high school students who signed a public letter refusing to be drafted into the military, in part because of what he had learned about the occupation in the youth movement. In addition to his political convictions, Green was also concerned about being outed as a gay man in the military and the homophobia he might experience as a result.

At the time when he would have started in the army, Green instead got a job at a central Tel Aviv branch of The Coffee Bean & Tea Leaf, an international coffee shop chain. After he was promoted to shift manager, Green discovered numerous violations of workers’ rights. He started organizing a union of baristas at the coffee shop and its franchises throughout the country to achieve better working conditions for the employees. When the company fired him for his union organizing, Green sued the franchise and won. He was back at his job five weeks later and went on to help negotiate the first national union contract for coffee house workers in Israel.

Green went on to work for the 2008 Tel Aviv mayoral campaign of Dov Khenin, a Knesset member from the Hadash Party, a non-Zionist coalition of leftist groups. Khenin was running for mayor with the City for All (Ir L’Kulanu) Party, on a platform focusing on housing and workers’ rights. The party’s goal was to build “an urban left…relevant to contemporary urban life, different from old fashioned socialist/communist movements.” Though he lost the race, Khenin won 34 percent of the vote (46,000 votes) against incumbent mayor Ron Huldai, “a significant achievement for a communist…in the biggest city in Israel.” City for All became the largest faction in the Tel Aviv City Council in what Green considered a successful campaign.

Green then joined Khenin in the Knesset as his parliamentary advisor. “I was super young when I started,” Green explained. “I was 21, without any academic degree…but [the Knesset] was like a university for me.”

A major part of Green’s work in the Knesset was building grassroots opposition to anti-democratic bills. He found that these bills often pass unless there is an organized vocal opposition. Green sought to address the disconnect between the Knesset and the public: how few from the Israeli public were aware of these bills and how little Knesset members understood about how to strategically use grassroots organizing campaigns to influence the outcome of pending legislation. Even when their attempts to fight anti-democratic bills were unsuccessful, Green explained, they were always worthwhile because they raised public consciousness and put right-wing politicians on the defensive.

Green believes the City for All activities in Tel Aviv and the fights against anti-democratic bills in the Knesset were part of “the foundations for the social protests in 2011.” According to Green, several of the key activists in the summer of 2011 protests had their initial experiences “in the political world” with Dov Khenin’s mayoral campaign, and City for All and influenced subsequent political discourse. In the months prior to July 14, the first tent protest, Green mobilized grassroots protests against several anti-democratic bills that had been introduced in the Knesset. In fact, on Jan. 15, 2011, Green organized a protest of more than 15,000 people against a bill calling for an investigation of the funding of human rights groups. Green believes this organizing “was one of the first sparks” of the social justice protests.

Green took a leave of absence from his work in the Knesset to become a central leader of the J14 tent protests, the largest protest movement in Israeli history. Beginning in July 2011, hundreds of thousands of people participated in weekly protests of social and economic justice issues, ranging from the high price of housing and basic consumer goods to inadequate publicly funded childcare. Green helped construct the first tent city on Rothschild Boulevard in Tel Aviv—a prototype for tent cities that popped around the country as a form of protest, as well as a center of discussion and organizing for the weekly marches. “It was like all the clouds scattered away and there was a ray of light and sunshine. Making Israel something different for a few months.”

Green recalled the incredible power that the young leaders of the social protest, mostly in their mid-20s, felt during that summer. They would “sleep two-and-a-half hours a night,” as they worked non-stop to try to effectively build on the momentum of this massive outpouring of dissent to the status quo. On Sept. 3, 2011, Green organized the single largest protest in Israeli history, mobilizing half a million people nationwide.

Although it was a “magical” time, which showed many Israelis the possibility of a different social reality, Green believes their efforts to translate the momentum from the social protest into political power were limited. Even though, at one point, a poll found that 88 percent of the Israeli public supported the protest, a right-wing government was re-elected in the next election. Green surmises that this was because most Israeli voters don’t vote based on social issues, but rather based on their “desire for security,” which the Israeli right-wing has skillfully claimed as their exclusive domain. Therefore, Green says, “thinking that we would be able to win without connecting our struggle to the occupation—that was a mistake.”

In the fall of 2011, Green joined with Stav Shaffir and Yonatan Levy to found the Israeli Social Movement, which attempted to sustain ongoing grassroots organizing in support of the political goals of the J14 protests. The group disbanded a year later; Green returned to his work with MK Khenin and Stav Shaffir successfully ran for the Knesset with the Labor Party.

Green also worked as an organizer on Knesset campaigns for Hadash in 2013 and the Joint List in 2015. The Joint List was formed in 2014 as an alliance between Hadash and the Arab-dominated political parties Balad, Ta’al, and the United Arab List. Green was concerned about this merger between parties because of his belief in the unique strength of a joint Jewish-Arab leftist party, which would be less possible if Hadash became part of a more Arab nationalist coalition. Khenin is currently the only Jew representing the Joint List in the Knesset. 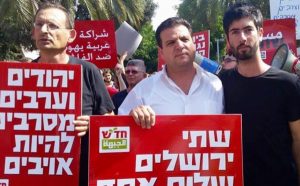 Alon-Lee Green, rigth, with Hadash MKs Dov Khenin, left, and Ayman Odeh, center, on October 9, 2015. The placards read: “Jews and Arabs stand together against the escalation, together for peace.” | American Jewish Peace Archive

Standing Together, the Jewish and Arab social movement where Green currently serves as national director, started in 2014 as “talks between a lot of people from different backgrounds, different kind of struggles, and different [political] parties” who “shared the same values of the direction Israel needs to go, and the same disappointments from the current left.” Standing Together is “guided by the principles of peace, equality, and social justice” and recognizes “the interconnections of the ongoing occupation of Palestinian territories, the growing social and economic disparities within Israeli society, and the attacks by the government on democratic freedoms” and on the Arab-Palestinian citizens of Israel. “We cannot solve one of these problems without solving the other,” they proclaim.

Over the past three years, Standing Together has supported various initiatives: from a fight to raise pension payments for senior citizens, to campaigns against the demolition of Bedouin villages within Israel, to participation in anti-occupation demonstrations in conjunction with the binational peace group Combatants for Peace. The group’s main strength to date lies in its ability to organize diverse groups of people on a grassroots level and in forging coalitions between single-issue groups and non-governmental organizations under a broader political umbrella.

Green believes American Jews can most effectively impact the occupation by lobbying their government to promote peace. He encourages young American Jews to gain a more “balanced” understanding of the conflict by speaking with Palestinians if they choose to come to Israel, though Green believes that American Jews should first and foremost direct their political energies toward fighting for social and economic reform within the U.S. He expressed appreciation for the spirit of Occupy Wall Street protests in 2011, which emerged a few months after the social protests commenced in Israel, one of many grassroots movements worldwide inspired by the Arab Spring of 2011.

His advice to young activists: It is almost always worthwhile to become involved in grassroots campaigns, even if success appears unlikely. Not only do these struggles sometimes succeed, but also they will always win “self-respect, the respect of others, and [a feeling of solidarity with those] who feel you are with them.”

Hearing Green’s story was a powerful reminder to me as a young activist of the years of work that often go into laying the groundwork for large scale campaigns. Green’s organizing work in Tel Aviv with the City for All campaign was, in part, why the J14 tent protest movement emerged so rapidly following the Arab Spring. Standing Together’s success at mobilizing diverse constituencies to attend the refugee rally was in part because of its years of work in diverse Israeli communities working for the rights of Arabs, Bedouins, the elderly and disabled, LGBTQ people, and the poor. The media often portrays mass movements as spontaneous eruptions; the work that goes into movement building over the course of years is absent from this narrative.

Green’s repeated message and major lesson from years of political work was that the occupation is deeply interconnected with social and economic inequality in Israel, and that one must fight both issues interconnectedly. I think this is easy to forget from the outside, as an American looking at the injustices of the occupation. I think American organizations could benefit from Green’s analysis and support the work of both human rights organizations that combat the injustices of the occupation, as well as those fighting for social and economic equality and reform within the state of Israel.