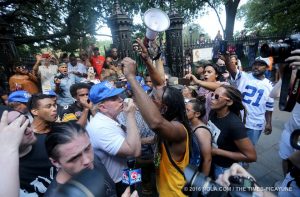 David Duke, a former Ku Klux Klan Grand Wizard, finally got what he deserved when he was forced out of a racist protest on Saturday in New Orleans, Louisiana.

The protest Duke attended was to counter the Take ‘Em Down NOLA protest, which was calling for the removal of a Confederate statue of Andrew Jackson – but fortunately, Duke was stopped when a crowd of Black Lives Matter protesters chased him away. Sadly, this confrontation didn’t occur before Duke could share some of his white supremacist rhetoric with the crowd. Duke preached:

“I am here to defend our American heritage. Our Louisiana heritage and our New Orleans heritage.”

But it didn’t take long before protesters surrounded Duke, and started calling him out. A crowd gathered and chanted things like “Racist, fascist, anti-gay!” and “Right-wing bigot go away!” These protesters refused to let up until they had forced Duke out of Jackson Square completely.

David Duke is yet another racist white man who serves as a major threat to this country. Duke is not only one of Donald Trump’s most racist, loyal supporters, but he is now running for Senate in Louisiana after being inspired by the support that Donald Trump’s hateful rhetoric has received from racist voters.

Trump has created an environment where racists like Duke believe they can thrive, and it’s becoming more and more critical that we continue to shut down white supremacy whenever we see it. These protesters did an amazing job in the face of hate, and hopefully Duke will be even just a little bit discouraged.