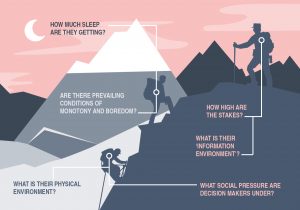 In 2014, 29-year-old Mohammed Uddin spent a few weeks with the Islamic State in Syria. On his return to the UK he was arrested and in 2016 convicted of preparing acts of terrorism. The jury was told that Uddin returned to the UK because he couldn’t tolerate conditions, which included hardships like cold water, poor food, ‘stinky shared toilets’, and the boredom of ‘doing absolutely jack’ (doing nothing). At one point, he told an associate back home ‘U need to get used to the cold water and no electricity… It’s tough bro lol, a LOT of patience is required’.

People who leave the relative comfort of developed countries to live in remote training camps or enter theatres of war often experience an abrupt and difficult transition. Not everyone can cope, as Uddin’s case shows.

Remote and challenging environments are also encountered by security personnel who might be posted to them, for example, in critical infrastructure industries such as oil and gas organisations, as police or government liaison officers, as part of a military deployment, or perhaps undercover.

Studies of the performance of people who voluntarily enter extreme and unusual environments – mountaineers, polar explorers, astronauts, deep-sea divers, and cavers, for instance – highlight the ways in which decision making is affected by stress in challenging situations. These studies help us understand how decision making by terrorists and security personnel might be affected in similarly challenging environments, and highlight the implications for practitioners and policy makers.

The physical demands of extreme environments, such as severe temperatures, are often obvious and achieving goals can involve the risk of injury and death through, for example, suffocating, freezing, starving or falling.

Nasty as these are, physical hazards are not the hardest part of an extreme deployment. The psychological pressures can be as – or even more – challenging. It’s not just the fear and anxiety triggered by ever-present danger. As Uddin’s story illustrates, people in extremes also face days or weeks of monotony. And, the interpersonal pressures can become intolerable: being cooped up for weeks with the same small group of people raises the risk of destructive social conflict.

These physical and psychological sources of stress can interfere with decision making in many ways. Under acute (short-lived, high intensity) stress we focus on short-term rapid responses at the expense of complex thinking. This type of response can be life-saving when we need to react to immediate danger, but can also lead to ‘tunnel vision’ and ill-thought-through decisions. In some cases, decision makers under stress experience ‘decision inertia’, a form of mental paralysis in which they procrastinate and find themselves unable to act.

Chronic, or enduring, stress can also have a corrosive effect. Experiencing danger, hardship, interpersonal pressure, sleep deprivation, and monotony for days at a time can lead to impaired vigilance, reduced stress-resiliency, suppressed emotion, and difficulties interacting with others. All in all, these responses are unlikely to promote sustained effective decision making.

Here are some factors to consider if you are assessing the decision-making capability of a friendly team or a hostile group.

How to make better decisions under stress

The research is clear: the best way to protect yourself from making poor decisions under stress is to train and prepare for it. Training enhances both skills and self-efficacy, enabling you to make better decisions and giving you the confidence to carry them out with minimal hesitation. High-pressure training simulations give you a taste of what it feels like to experience extreme stress and to understand your reactions to it. Practicing important physical skills repeatedly, like complex climbing manoeuvres, means they become ‘over-learned’ – engrained to a point of being automatic, and more likely to persist in the face of danger and fear.

Team preparation is important: a well-trained cohesive team acts in harmony, coordinating their actions and looking out for each other, to achieve complex goals in hazardous conditions. As part of preparation, consider what you and your team can do to maintain the most accurate information about changing physical conditions, perhaps via a ‘base camp’ crew that communicates with you effectively and often.

Once in an extreme environment, you can minimise the risks of social stress by keeping an eye on minor spats or simmering tensions that could escalate into something more serious, taking opportunities for privacy and ‘time out’ from the group, keeping busy – and most of all, being tolerant and tolerable.