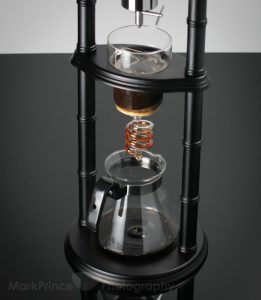 During these dog days of summer, iced coffee seems to be the rage and there are few better theatrics for coffee brewing than the Japanese-styled iced coffee dripper tower that seem to be popping up in more and more cafes in North America. The good news is, you can bring this brewing method home if you like and have the exact same style of coffee.

Ice brew results in a pretty mellow cup of concentrated coffee elixir. The brews are usually concentrated and require water and ice to bring the resulting cup down to a normal-strength cold brew beverage. This brewing method usually results in very mellow, very muted acids (pretty much undetectable), and a nice rounded body taste. Unfortunately, this brewing method tends to obliterate most specific taste nuances in various types of single origin coffees: the resulting brew usually just tastes like “coffee”. That said, you still want to use a very good quality roasted coffee with this brewing method. We’ve found that using grocery-store whole beans or preground commodity coffee results in a pretty stinky brew. Using a good middle-of-the-road specialty coffee that is freshly roasted (within 10 days or less) always gives us the best cup.

This brewing method takes a long time. In the two methods we’ll describe visually below, it can take between 3 hours and 5 hours (or longer) to complete a brew cycle. The coffee does keep in the fridge for at least a day though without much discernible loss in quality, so all summer long you can do a brew, and drink yesterday’s brew from the refrigerator.

In Japan, these kinds of brewers are seriously the rage. Some towers can be as tall as 1.5 meters or higher, brewing into multiple vessels. In Vancouver, 49th Parallel’s cafe features two of these Japanese commercial iced coffee brewers, sitting majestically on the back bar counter. In other cafes around the US and Canada, you can see them sitting in display windows.

They get such attention because of the ornateness of the devices. Usually the most ornate bits are where the ground coffee goes. They are often made from mouth-blown glass, and usually feature a curly tube section where the brewed coffee slowly winds down and drip, drip, drip falls into a waiting carafe. The drip control mechanisms are pretty fancy too – some of them are made from ornate brass with old-timey levers or dials to control the flow of water dripping onto the bed of coffee. And on top, there’s the large glass vessel where a up to a kilogram (or more) of ice goes in.

Do they need to be so ornate and theatrical? Of course not; and some of the design elements – like the curly tubes at the bottom of the coffee grounds holder – are certainly not necessary to producing a better brew. But iced drip coffee makers do need certain design elements to help in brewing a better coffee. The good news is, home units you can buy almost always feature these crucial elements. They include: 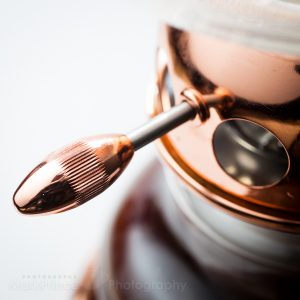 The Japanese styled Iced Coffee tower (and the Hario Pota, detailed below) work on the principle of a very drawn out extraction time with ice cold water to create a concentrated coffee elixir. The process is slowed down by several factors: the ice slowly melting delivers water at a slow pace; the dripper mechanism is controlled to do 1-2 drops per second on average; the volume of ground coffee in a tall vertical canister shape further slows down flow rate through the bed of coffee; and in the case of the tall towers, the curly tube underneath creates a slow down in the extracted brew, possibly causing some additional mixing and evenness to the brew. (though I am entirely skeptical about that last point).

Iced water has a different extraction process than hot water. It reacts differently, down to a molecule level, with the ground coffee when compared to traditional hot water brewing. Some elements (including caffeine) are much more resistant to extraction with cold water than they are with hot (though the extended brewing times ensure most of the coffee’s caffeine will extract). Other elements that contribute to things like acidity react differently with iced water.

Because of the differences, ice drip brewers tend to produce a brew that is almost acid free (in terms of taste), with a very pleasing creamyness and good viscous body. Coffees that are particularly spicy or chocolatey tend to show well in iced drip brewers, but so do fruity natural coffees. It is hard to distinguish specific single-origin tastes in a brew of ice-drip coffee, but I can remember putting a super-fruit bomb Beloya through an ice drip process a few years ago, and getting a lot of the fruity characteristics in the brewed cup.

These brewers also produce a pretty concentrated elixir. It’s nearly twice the “strength” of a normal hot-brewed drip coffee. This is by design based on how much ground coffee you’re using while brewing, and it means the finished brew can easily handle dilution by the addition of ice or water or both later on when drinking.

For both brewing devices described below, we have some basic parameters for setting up the brew.

The Ice Drip Coffee Tower How To

In this first how to, we’ll walk you through the process of using an Iced Drip Coffee tower, ta device usually manufactured in Japan or Taiwan where they are extremely popular. The model we’re demonstrating is no longer available, but several similar models are available in North America today, including the Yama Cold Dripper ($215, Amazon) and the Hario Clear Dripper Coffee Maker ($245, Amazon). You can download a PDF of the instructions for the Yama Ice Drip brewer here.

Step by Step How To, Ice Dripper Brewer 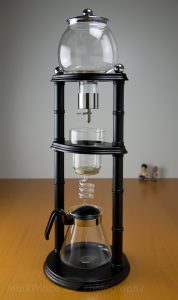 Typical Ice Tower Brewer
This particular model is no longer available for sale, but features much of the same design that most tall towers have. 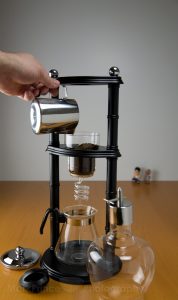 Adding Coffee
We use a 12g / 120ml brewed coffee ratio for deciding how much coffee to use. In this brewer, about 60g is used to brew roughly 600ml total volume. Grind is a normal drip grind. 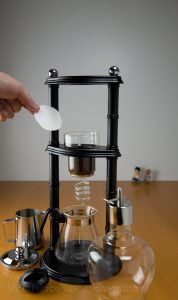 Adding filters
Some of these drip towers also advise using a paper filter disk on top of the ground coffee to help even the distribution of water evenly over the grounds. A cloth filter device is in the bottom of the coffee area. 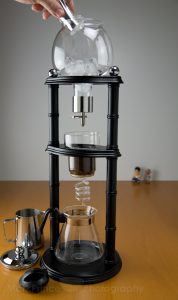 Adding Ice
You want to fill up the upper chamber as much as you can with ice. Remember, you can always stop the brew simply by adjusting the dripper mechanism. 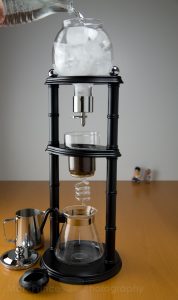 Adding Water
Add some water to kind of “kick start” the brew – not much. We fill the top globe about 1/3 of the way at the start.

Adjusting the Dripper
Here, the dripper mechanism is adjust so it does about one drip per second. A brew in this device takes about 4 hours. 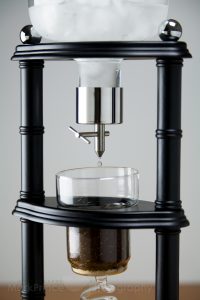 The Drips
The mechanism can precisely control how fast or how slow drips come out. 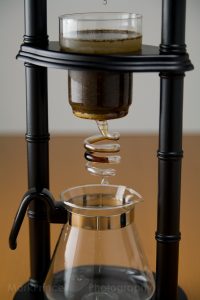 Starting to Brew
The coffee’s been saturating for about 20 minutes by htis point, and brew is finally starting to come down the (mostly theatrics) curly spout at the bottom. 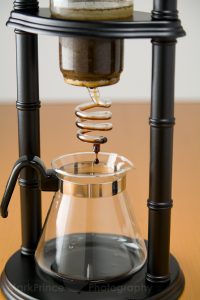 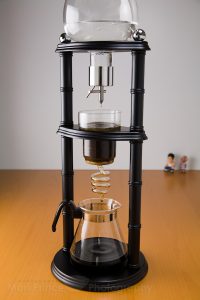 3 hours in
3 hours in, and most of the ice is melted. Depending on the size of your cubes or how much has been brewed, you can add more icecubes to the top vessel. 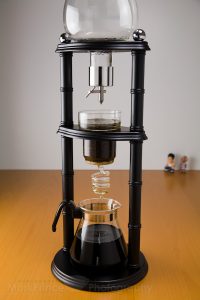 Almost done
The brew is nearing the end, with about 400ml brewed up to this point. About one more hour to go. 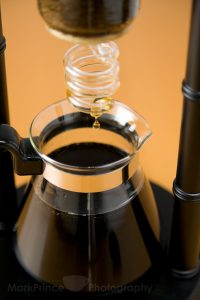 Almost done
Near the end of the brew, you can see how diluted the final drops are.

Hario Pota Dripper How To

The Hario Pota is a much more compact (and still quite elegant in its own way) ice drip brewer. It performs almost identical to the Ice Drip Tower versions, but in a much more compact body, and because of the wider ground-coffee container, can be brewed a bit faster – around 2 to 3 hours vs. the 4-5 hours for the tower versions. We set the drip to around 1 per second, which cuts about 33% of the brewing time, compared to the tower version.

The Pota can even be placed in the refrigerator while doing its thing. It is made from glass, steel and copper parts (as pictured) but the more recent versions feature bronze instead of copper. The dripper mechanism can be a bit tricky to use, but once you get the hang of it, it’s just as easy as the tower models. The Hario Pota (Amazon Link) goes for around $260 USD. Downloadable instructions for the Pota are here.

Step by Step How To, Hario Pota Brewer 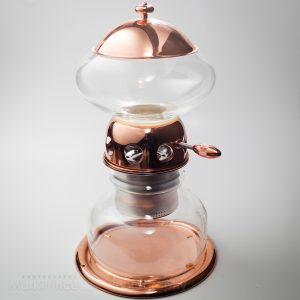 Hario Pota Ice Brewer
The Pota is much more compact than the ice drip towers, and can easily fit in a fridge while brewing (resulting in a cold brew when done) 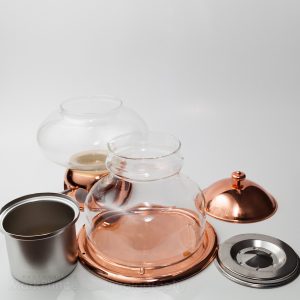 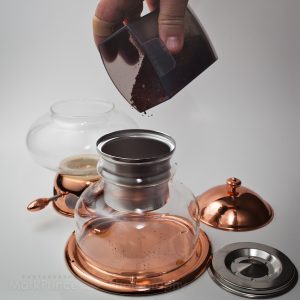 Adding ground coffee
Adding about 50g of coffee here, in order to brew about 500ml of concentrate. 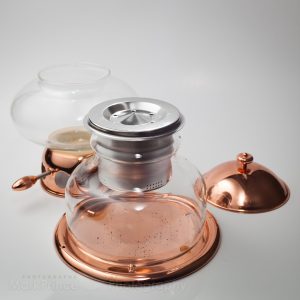 Spreader in place
The water spreader is back in place, waiting for the rest of the unit to be assembled. 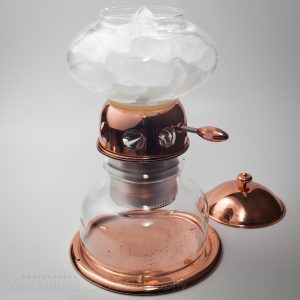 Adding Ice
The top chamber is filled with ice from our filtered ice maker. 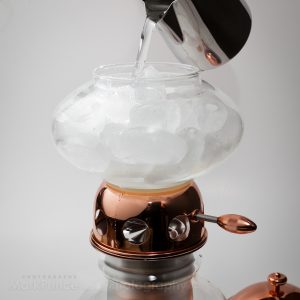 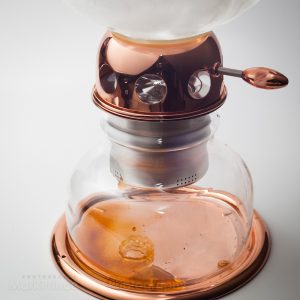 First brewed coffee
The first drips of brewed coffee are coming out. Note the grounds in the pot – it’s not much but since the filter is just a steel filter built into the bottom of the grinds chamber, some will initially fall through. 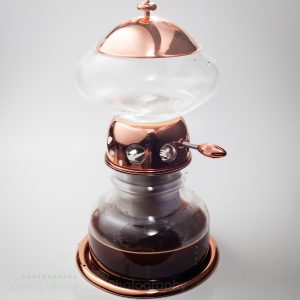 Nearly done
The Pota has been going for about 2.5 hours by this point, and is about 80% done its brew. 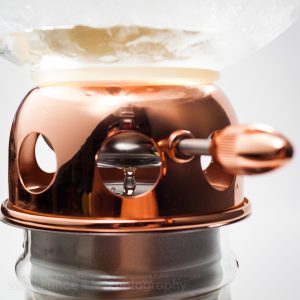 Drips
The drips are pretty precisely controlled on the Pota – you can adjust from one every 10 seconds or longer, all the way down to several drips (or an even flow) every second. 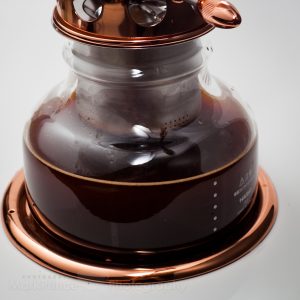 Finished brew
The Pota is done, about 3.5 hours after starting. Remove the top assembly, grounds chamber, and serve from the bottom carafe.