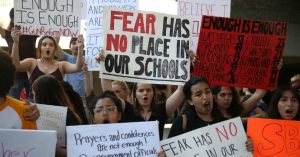 Students and advocates join together after a school shooting that killed 17 to protest against guns on the steps of the Broward County Federal courthouse on Feb. 17, 2018 in Fort Lauderdale, Florida. (Photo: Joe Raedle/Getty Images) 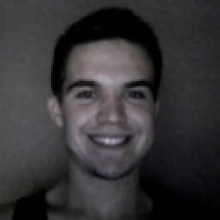 As busloads of students from Marjory Stoneman Douglas High School traveled to Florida’s capital to demand stricter gun control measures in the wake of last week’s deadly shooting, students from the nearby West Boca Raton High School staged a massive walkout on Tuesday to express solidarity with their peers.

The West Boca Raton walkout was just one of many that took place throughout Florida on Tuesday.

“Students at other area schools also staged walkouts, including Fort Lauderdale and Hollywood McArthur high schools,” according to the Miami Herald. “Hialeah High is reportedly planning a walkout on Wednesday.”

Followed by a convoy of police cars and filmed by helicopter cameras, hundreds of students marched along State Road 44 in the direction of Marjory Stoneman Douglas High School—the site of last week’s shooting that left 17 dead—carrying signs and chanting “We want change!”

The walkouts and demonstrations came as hundreds of Marjory Stoneman Douglas students were en route to Tallahassee, where they plan to meet with state lawmakers on Wednesday and attend rallies organized by local activist groups.

Tallahassee-area schools have said they will excuse the absences of students who choose to join their peers in demonstrations.

“We think that we’re going to be able to start a conversation. People need to get talking about this. This is not an issue that needs to recur,” Kai Koerber, a junior at Marjory Stoneman Douglas High School, told CNN before boarding a bus headed to Tallahassee. “We’re all here because we need to strive for change.”

“If you’re not with us, you’re against us, and you’re against saving the lives of innocent children,” added senior Chris Grady. “And we’re going to be voting you out.”