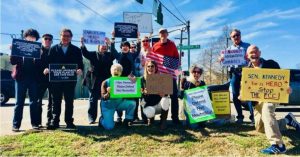 Louisiana residents congregated outside Sen. John Kennedy’s (R-La.) office on Thursdau to urge him to back a CRA resolution to nullify the FCC’s recent decision to repeal net neutrality protections. (Photo: Free Press)

Open Internet advocates and lawmakers were urging supporters on Friday to help secure one last vote in the Senate in favor of reversing the Federal Communications Commission’s (FCC) unpopular net neutrality decision.

The Senate officially received the sham Restoring Internet Freedom Order from @FCC putting us 1 step closer to forcing a vote on my CRA & restoring #NetNeutrality We still need 1 more Republican to secure victory. Make your voices heard on the phones, online, in your communities!

We need one Senate vote, then it’s game on for #NetNeutrality. Help us get that vote. Take action if you live in one of these states: https://t.co/S8d0OxZQe0 pic.twitter.com/qVynuaBAjF

The FCC sent its official order to roll back net neutrality protections on Friday, following its vote in December.

With the Republican-led panel’s 3-2 decision along party lines, internet service providers (ISPs) like Verizon and Comcast will be free to give preferential treatment to wealthy internet companies that can afford to pay for faster service—essentially creating “fast lanes” and “slow lanes” for the internet.

Immediately after the vote—which was opposed by 83 percent of Americans, according to a University of Maryland poll—Sen. Ed Markey (D-Mass.) announced his plan to introduce a Congressional Review Act (CRA) resolution under which the Senate could vote to reverse the FCC’s decision.

With the order now officially on Capitol Hill, it only needs to be sent to the House and published in the Federal Register, after which Market will have 60 days to gather enough support for a vote to nullify the decision.

The 50 senators who have said they would vote to restore net neutrality include one Republican—Sen. Susan Collins (R-Maine)—as well as all 47 Democratic senators and both Independents.

On Thursday, Louisiana constituents joined advocacy groups Fight for the Future and Free Press to deliver 6,000 petition signatures to the office of Sen. John Kennedy (R-La.), urging him to throw his support behind the CRA.

#NetNeutrality is particularly important to the 1 in 5 Louisianans who have no Internet provider or have only one. In a world without protections, these people can’t “vote with their feet” & switch providers. Be a be hero & support the net neutrality CRA vote @SenJohnKennedy! pic.twitter.com/fz6sxPBl9J

“The internet has become an invaluable tool for many people who work from home or have their own businesses,” said Jas Duplessis, a Louisiana resident who protested outside Kennedy’s office. “Restricting it minimizes the opportunity people have to make their own place in the world financially, destroys a large aspect of the free market and takes away from the American dream.”