For the third time in a year and a half, the Advanced Laser Interferometer Gravitational Wave Observatory has detected gravitational waves. Hypothesized by Einstein a century ago, the identification of these ripples in space-time – for the third time, no less – is fulfilling the promise of an area of astronomy that has enticed scientists for decades, but had always seemed to lie just out of our reach.

As a gravitational-wave astrophysicist and member of the LIGO Scientific Collaboration, I am naturally thrilled to see the vision of so many of us becoming a reality. But I’m accustomed to finding my own work more interesting and exciting than other people do, so the extent to which the whole world seems to be fascinated by this accomplishment came as something of a surprise. The excitement is well-deserved, though. By detecting these gravitational waves for the first time, we’ve not only directly verified a key prediction of Einstein’s theory of general relativity in convincing and spectacular fashion, but we’ve opened up an entirely new window that will revolutionize our understanding of the cosmos.

Already these discoveries have affected our understanding of the universe. And LIGO is just getting started.

Tuning in to the universe

At its core, this new way of understanding the universe stems from our newfound ability to hear its soundtrack. Gravitational waves aren’t actually sound waves, but the analogy is apt. Both types of waves carry information in a similar way, and both are completely independent phenomena from light.

Gravitational waves are ripples in space-time that propagate outward from intensely violent and energetic processes in space. They can be generated by objects that don’t shine, and they can travel through dust, matter or anything else, without being absorbed or distorted. They carry unique information about their sources that reaches us in a pristine state, giving us a true sense of the source that can’t be obtained in any other way.

General relativity tells us, among other things, that some stars can become so dense that they close themselves off from the rest of the universe. These extraordinary objects are called black holes. General relativity also predicted that when pairs of black holes orbit tightly around each other in a binary system, they stir up space-time, the very fabric of the cosmos. It’s this disturbance of space-time that sends energy across the universe in the form of gravitational waves.

That loss of energy causes the binary to tighten further, until eventually the two black holes smash together and form a single black hole. This spectacular collision generates more power in gravitational waves than is radiated as light by all the stars in the universe combined. These catastrophic events last only tens of milliseconds, but during that time, they are the most powerful phenomena since the Big Bang.

These waves carry information about the black holes that can’t possibly be gained in any other way, since telescopes can’t see objects that don’t emit light. For each event, we are able to measure the black holes’ masses, their rate of rotation or “spin,” and details about their locations and orientations with varying degrees of certainty. This information allows us to learn how these objects were formed and evolved across cosmic time.

While we have previously had strong evidence for the existence of black holes based on the effect of their gravity on surrounding stars and gas, the detailed information from gravitational waves is invaluable for learning about the origins of these spectacular events. 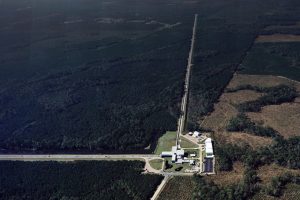 In order to detect these incredibly quiet signals, researchers constructed two LIGO instruments, one in Hanford, Washington and the other 3,000 miles away in Livingston, Louisiana. They’re designed to leverage the unique effect that gravitational waves have on whatever they encounter. When gravitational waves pass by, they change the distance between objects. There are gravitational waves going through you right now, forcing your head, feet and everything in between to move back and forth in a predictable – but imperceptible – way.

You can’t feel this effect, or even see it with a microscope, because the change is so incredibly tiny. The gravitational waves that we can detect with LIGO change the distance between each end of the 4-kilometer-long detectors by only 10⁻¹⁸ meters. How small is this? A thousand times smaller than the size of a proton – which is why we can’t expect to see it even with a microscope. 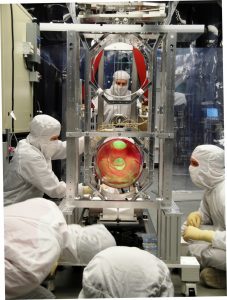 To measure such a minute distance, LIGO uses a technique called “interferometry.” Researchers split the light from a single laser into two parts. Each part then travels down one of two perpendicular arms that are each 2.5 miles long. Finally, the two join back together and are allowed to interfere with each other. The instrument is carefully calibrated so that, in the absence of a gravitational wave, the interference of the laser results in nearly perfect cancellation – no light comes out of the interferometer.

However, a passing gravitational wave will stretch one arm at the same time as it squeezes the other arm. With the relative lengths of the arms changed, the interference of the laser light will no longer be perfect. It’s this tiny change in the amount of interference that Advanced LIGO is actually measuring, and that measurement tells us what the detailed shape of the passing gravitational wave must be.

All gravitational waves have the shape of a “chirp,” where both the amplitude (akin to the loudness) and the frequency, or pitch, of the signals increase with time. However, the characteristics of the source are encoded in the precise details of this chirp and how it evolves with time.

The shape of the gravitational waves that we observe, in turn, can tell us details about the source that could not be measured in any other way. With the first three confident detections by Advanced LIGO, we’ve already found that black holes are more common than we ever expected, and that the most common variety, which forms directly from the collapse of massive stars, can be more massive than we previously thought was possible. All this information helps us understand how massive stars evolve and die. 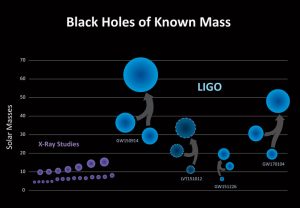 The three confirmed detections by LIGO (GW150914, GW151226, GW170104), and one lower-confidence detection (LVT151012), point to a population of stellar-mass binary black holes that, once merged, are larger than 20 solar masses – larger than what was known before.LIGO/Caltech/Sonoma State (Aurore Simonnet)

This most recent event, which we detected on Jan. 4, 2017, is the most distant source we’ve observed so far. Because gravitational waves travel at the speed of light, when we look at very distant objects, we also look back in time. This most recent event is also the most ancient gravitational wave source we’ve detected so far, having occurred over two billion years ago. Back then, the universe itself was 20 percent smaller than it is today, and multicellular life had not yet arisen on Earth.

The mass of the final black hole left behind after this most recent collision is 50 times the mass of our sun. Prior to the first detected event, which weighed in at 60 times the mass of the sun, astronomers didn’t think such massive black holes could be formed in this way. While the second event was only 20 solar masses, detecting this additional very massive event suggests that such systems not only exist, but may be relatively common.

In addition to their masses, black holes can also rotate, and their spins affect the shape of their gravitational-wave emission. The effects of spin are more difficult to measure, but this most recent event shows evidence not only for spin, but potentially for spin that is not oriented around the same axis as the binary’s orbit. If the case for such misalignment can be made stronger by observing future events, it will have significant implications for our understanding of how these black hole pairs form.

In the coming years, we will have more instruments like LIGO listening for gravitational waves in Italy, in Japan and in India, learning even more about these sources. My colleagues and I are still eagerly awaiting the first detection of a binary containing at least one neutron star – a type of dense star that was not quite massive enough to collapse all the way to a black hole.

Most astronomers predicted that pairs of neutron stars would be observed before black-hole pairs, so their continued absence would present a challenge to theorists. Their eventual detection will facilitate a host of new possibilities for discoveries, including the prospect of better understanding extremely dense states of matter, and potentially observing a unique light signature using conventional telescopes from the same source as the gravitational-wave signal.

We also expect to detect gravitational waves within the next few years from space, using very precise natural clocks called pulsars, which send blasts of radiation our way at very regular intervals. Eventually we plan to place extremely large interferometers in orbit, where they can evade the persistent rumbling of the Earth, which is a limiting source of noise for the Advanced LIGO detectors.

Nearly every time scientists have built new telescopes or particle accelerators, they’ve discovered things no one could have predicted. As exciting as the known prospects for discovery are in this new field of gravitational-wave astrophysics, as a theorist I’m most excited by the unknown wonders that still lie in store for us.