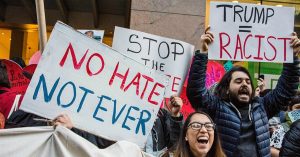 An anti-Trump protest in April. (Photo: A. Jones/flickr/cc)

Cleveland’s “extreme limitations” on protests, laid out on Wednesday, decried as “vague and unacceptable.”

The city of Cleveland’s rules for the Republican National Convention (RNC), released Wednesday, are “unacceptable and far too restrictive,” according to advocacy groups and protest organizers.

The convention, which runs July 18-21, is expected to attract scores of protesters. For example, a coalition of social justice groups is organizing a large End Poverty Now march for July 18, and a political action group founded by American Muslim doctors and young professionals in the Midwest, Stand Together Against Trump (STAT), is planning for a 10,000-person march and rally in downtown Cleveland on July 21—the day Donald Trump is expected to formally accept the party’s nomination after surpassing the necessary delegates on Thursday.

According to the Washington Post, “there are at least 10 applications on file for major parades, protests, and news conferences beginning the week before the convention.”

Politico reports: “The planners of those events insist they’re taking precautions to encourage nonviolence, but some fear that the strong feelings Trump engenders among supporters and detractors alike will create a combustible atmosphere.”

Cleveland Mayor Frank Jackson and others announced the protest route, and released a wide list of common items that would be banned during the RNC within downtown Cleveland, including coolers, tennis balls, squirt guns and various handheld weapons, besides firearms.

They also announced a “speaker’s platform” will be installed in Public Square for people to use in half-hour segments, and said they will set up a process for protest groups to apply for permits to set up in Willard Park, near City Hall, and Perk Plaza, near Superior Ave. and East 12th St.

The parade route places protesters at a distance from the Quicken Loans Arena, where the RNC will take place. Marches can only take place during restricted hours, between 2 pm and 4 pm on July 18th and between 9 am and 1 pm from July 19-21. Permits will be issued in one-hour increments, and parades must be complete in 50 minutes, city officials said. 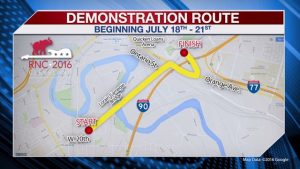 The groups organizing the protests say the rules are too restrictive.

Christine Link, executive director of the ACLU of Ohio, pointed out to Cleveland.com that the majority of the parade route is on Lorain-Carnegie bridge, where a limited number of people would be able to see the demonstrators. What’s more, the designated march times practically ensure that GOP delegates, who Cleveland.com notes “generally don’t show up for convention activities until the evening,” won’t see or hear the protesters either.

“The Republican National Committee deserves a safe space in which to select its nominee,” read a joint statement from Larry Bresler of Organize! Ohio; John Penley of Free Speech Safe Space for Anti-Trump Protesters; and Bryan Hambley of STAT.

“The citizens of the United States equally deserve broad opportunities to lawfully use public space for peaceful demonstrations,” they continued. “Confining demonstrators to a short route area for a limited time period in the morning and early afternoon flies in the face of the 1st Amendment’s right to free speech and the right to assemble.”

The “extreme limitations” laid out on Wednesday, they said, are “vague and unacceptable.”

Speaking to FOX8 Cleveland, Bresler explained, “If we have a march like ours that could have 5,000 people, people hardly get started in 55 minutes.” He said the groups were looking into legal action.

Activists are also expressing concern about the extent of militarization surrounding the RNC.

According to CNN, for the convention, “Cleveland is recruiting additional officers from other jurisdictions, hoping to triple their forces to about 4,000 to 5,000 officers. They have also ordered extra equipment, including 2,500 steel barriers, 16 police motorcycles and 2,000 sets of riot gear with body armor and batons.”

In March, a coalition of goups including the ACLU of Ohio, Cleveland NAACP, the state chapter of the National Lawyers Guild, and others sent an open letter (pdf) to Mayor Jackson and City Council president Kevin Kelley, expressing concerns about the city’s “purchase and possible misuse of tactical and riot gear, surveillance equipment and excessive use of security barricades.”

The letter read in part: “The deployment of certain military grade equipment and weapons, riot gear, caging equipment and surveillance devices in an urban setting among nonviolent demonstrators jeopardizes First Amendment and Fourth Amendment protections and creates a siege mentality.

“Such deployments,” it continued, “when unwarranted by immediate public safety needs, create a chilling effect that deters free speech and assembly through intimidation. Such deployments contribute to an ‘us vs. them’ mentality, project a hostile, militarized posture and undermine the fragile public trust between the people and their police.”

The American Friends Service Committee is planning a People’s Justice and Peace Convention for the days leading up to the RNC. “Its purpose,” according to organizers, “is to lift up issues that the RNC is not likely to address and to collectively develop solutions to achieve just, nonviolent, democratic, and sustainable results.”