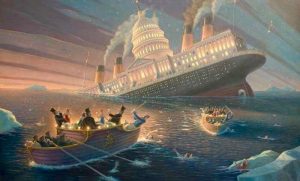 All things being equal, which they rarely are in the land of the yawning gap between rich and poor, the Washington establishment can go to hell. Allowing that there are some lawmakers, officials and careerist bureaucrats who are admirable people trying to do a good job, the Inside the Beltway crowd on the whole is one big Eddie Haskell, and it matters far less what the politics of the guy in the Oval Office are than what’s in it for them so long as they can continue feeding at the public trough and all those revered if largely superfluous traditions are respected.

And so I take delight that the chaotic opening days of the Cheeto Jesus administration has upset the Washington establishment apple cart, but also a certain pride that Trump and his handlers are so morally bereft and so utterly uncouth that the establishment — well, some of it anyway — is pushing back in praiseworthy ways as the ship of state steams full speed ahead toward a very big iceberg, an all-but-certain rendezvous with self destruction because it will be only able to play by its own bizarre alt-reality rules for so long before colliding with the real world.

It is those feckless Republicans, of course, who have been blindsided.

While Donald Trump the candidate vowed to shake up Washington, which apparently enabled several millions of voters to look past his racism, bigotry, misogyny and pathological inability to be truthful, Donald Trump the president has not just tipped over the apple cart, he and his secrecy-obsessed administration are equal opportunity scolds as disdainful of those Republicans as the Democrats.

He is castigating the relatively few Republicans with consciences who have not obediently fallen into line even as he cuts the loyal, if cowardly, Vichy Republican leadership out of the policy-making loop in contravention of one of the hoariest of Washington rituals when a new president has come to town. This White House’s learning curve is not merely slow, as some Trump apologists claim, it is non existent.

What we have here is a screwy-louie administration that has declared war on governance. Perhaps declaring war on Iran will be next.

This administration is so bent on slashing and burning, issuing uncompromising edicts and so filled with inept amateurs obsessed with political purity and unconcerned about procedure or law that the collision between ship and iceberg is all but inevitable with the Muslim Ban disaster and continuing fallout from it, including sacking the acting AG and a blistering dissent from a thousand or so State Department careerists, merely previews of things to come.

And you can now add insulting one of the U.S.’s staunchest allies to the ever lengthening list of crazy Trump spit.

Trump hectored Australian PM Malcolm Turnbull in a phone call for asking that the U.S. follow through on an agreement to take about 1,200 Australia-bound refugees from an Australian detention center in Papua New Guinea (as well as the unreported part of the deal — that Australia take a like number of U.S.-bound refugees mouldering in a Costa Rican detention center). Trump accused Australia of seeking to export “the next Boston bombers” and then hung up on a guy whose nation has sent troops to fight in Iraq and Afghanistan and flown missions over Syria for the allied coalition.

§
Here is how Trump is shaking up Washington:

In 2015, Senator Jeff Sessions, a flaming racist who fired up crowds at Trump campaign rallies with xenophobic calls to arms and as his reward will be the next attorney general, had this exchange with Sally Yates at her Senate confirmation hearing for deputy attorney general:

Yates, of course, did precisely that as acting attorney general in refusing to defend Trump’s Muslim Ban. And was sacked for it.

§
There are news leaks in all administrations, but because of a combination of disloyalty and dumbness, the Trump White House is more like a hole in a bucket, which offers us an unprecedented look behind the wizard’s curtain despite his obsession with secrecy. And so we know, among other things, about that phone call with the Aussie PM, that homeland security czar General John Kelly learned of the Muslim ban on CNN, that one of the two judges being considered for the Supreme Court vacancy was instructed to drive to Washington to maintain the illusion that the selection process was still competitive, that mention of Jews was intentionally left out of the presidential Holocaust Day statement, that Trump’s first military operation in Yemen was crippled because of a lack of concern about insufficient intelligence and ground support, and that Steve Bannon is a seriously evil man who acts out of hatred and spite, and delights in the damage he causes.

But far and away my favorite leak, and in its own way most frightening, is the view that Trump son-in-law Jared Kushner, who is seen by the leak brigade as the angel to Bannon’s devil, is the only person who has a taming influence on Cheeto. But because Kushner is a practicing Jew who observes the Sabbath from sundown Friday until sundown Saturday, that is when the president runs wild.

It was during the Sabbath that Trump unleashed tweet storms against his perceived enemies, gave an insulting, over-the-top speech at CIA headquarters, pressed the National Park Service for photos showing more people at his inauguration and upbraided Turnbull, only to apparently come off his bender on the following Sundays when Jared was back in the house.

§
Sadly, much of the smoke and fire fanned by the opposition will have been largely symbolic.

Trump’s Supreme Court nominee and billionaire Cabinet will be approved. There will be a Muslim Ban, if somewhat watered down. There will be a few court victories, but also losses. Many of those thousand or so protesting State Department employees will quit rather than knuckle under. Devil Bannon will outmaneuver Angel Kushner. The few rebellious Republicans will capitulate for fear of losing their Trump country club memberships. The hapless Democrats, who are badly overplaying their hand with tactics reminiscent of what Republicans did to Barack Obama, will be left to lick their wounds and wonder how it came to be that a bunch of women in funny pink knit caps seem to have more clout than they do.

And all the while the ship of state steams full speed ahead toward that very big iceberg.