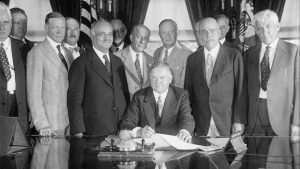 Today’s Republicans would have fit right in to Herbert Hoover’s administration. 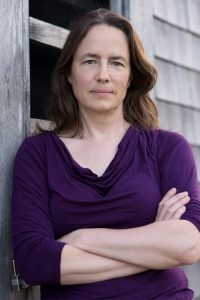 Shortly after President Trump took office, House Speaker Paul Ryan could feel just how close he was to finally achieving the goal he and his party colleagues had dreamed about for decades. With Republicans in uncontested power in Washington, he tweeted, they had a “once-in-a-lifetime opportunity to enact real comprehensive tax reform and get our economy moving.” Many Trump supporters thought reform meant relief for the “forgotten Americans” he talked about on the campaign trail. But Republicans had other plans, intending to take a wrecking ball to the system of American government that has been in place since 1933 and replace it with one based in their own ideology. If the “Tax Cuts and Jobs Act” becomes law, they will have succeeded.

It is hard to overstate the significance of this bill. It is a poison pill, killing the New Deal. The series of laws put in place by Franklin Delano Roosevelt and a Democratic Congress in the 1930s regulated business so employers could no longer abuse their workers or destroy the environment. It provided basic social welfare to support the elderly and infirm, and it developed infrastructure to guarantee everyone equal access to economic opportunity. Crucially, Democrats based their system on a distinctive ideology: The government must keep the economic playing field level for all Americans. As people at the bottom prospered, they would fuel economic growth for everyone.

This was indeed a “new deal for the American people,” as FDR put it. When he named it in 1932, government policy was based on the opposite ideology. Republicans who controlled the government in the 1920s insisted that national prosperity depended on government protection of the rich, who they believed would plow their capital back into the economy to provide jobs and higher wages for workers. When they took control of all branches of the federal government in 1921, they used their unchecked power to remake the government along the lines of their ideology. They slashed taxes and regulations and turned government over to businessmen, arguing that their policies would speed up the economy and bring the nation untold wealth.

In fact, the Republican policies did increase worker productivity by about 43 percent, but the profits went to business owners. So did the benefits of the tax cuts. By 1929, 5 percent of the population received one-third of the nation’s income. The structural weaknesses of this economy plunged the nation into the Great Depression. By the time FDR took office, 13 million people — 25 percent of the population — were out of work, the price of wheat had dropped from $1.05 to 39 cents a bushel, mothers went hungry so their children could eat, and people who had lost their homes lived in packing boxes in “Hoovervilles,” named after Herbert Hoover, the Republican president who oversaw the crash. Roosevelt’s call for a government responsive to the general welfare rather than the demands of the very wealthy won him the White House in a landslide, and the popularity of his New Deal committed the federal government to providing for the general welfare for the foreseeable future.

But while a vast majority of Americans — Democrats and Republicans both — liked the New Deal and believed it was a necessary corrective to the unfettered capitalism that had plunged the country into economic ruin, there was always a rump group of Republicans who loathed the idea that they could not run their businesses without check. They insisted that it was not their policies that had created the Depression, but rather that their policies had not been implemented fully enough. Rather than destroying individual liberty with government activism, government must be slashed still further. “Liquidate labor, liquidate stocks, liquidate the farmers, liquidate real estate,” advised Hoover’s treasury secretary. “It will purge the rottenness out of the system. High cost of living and high living will come down. People will work harder, live a more moral life. Values will be adjusted, and enterprising people will pick up the wrecks from less confident people.”

When Republican Party leaders ignored the Hoover holdouts and embraced a philosophy similar to that of the Democrats, the discredited faction howled that the Grand Old Party had become a “Me, too” party embracing socialism. In the 1950s, with America enjoying a prosperity and standard of living unimaginable to the rest of the world, they insisted that Democrats and Eisenhower Republicans were cozying up to Communists and crushing the US economy. To save America — and the Republican Party — they demanded a return to the ideology of the 1920s.

To get there, a cabal of Republicans deliberately chose to abandon reasoned argument and pushed their ideology as sacrosanct. In 1951, William F. Buckley, Jr.  dismissed as “superstition” the Enlightenment belief that societies progressed through the free exchange of ideas. After all, given the facts, Americans chose an active government. Buckley argued that true Americans should refuse to compromise the principles of individualism and the Christianity they believed supported it.

Buckley and his brother-in-law L. Brent Bozell not only hated Democrats; they cheered on Sen. Joe McCarthy’s attacks on the Republican Eisenhower administration. In 1954, the two self-proclaimed “conservatives” condemned “liberals,” by whom they meant everyone, Democrat or Republican, who argued for fact-based government activism. Complaining that liberals were socialists who dominated all public spaces in America — government, media and universities — Buckley hit up rich industrialists for money to start a magazine to give voice to the “violated businessman’s side of the story.”

Led by National Review, “movement conservatives” set out to oust liberals from power, arguing that Americans were wrong to think that active government protected them from the excesses of unfettered capitalism. Rather, big government destroyed the lives of hardworking Americans. It sucked up a man’s hard-earned wages through taxes and gave it to lazy voters who demanded handouts. In the 1950s, when the government began to enforce desegregation, the “takers” were African-Americans, but over time, the category of takers included all women, minorities, and union members who wanted the government to level the playing field. This redistribution of wealth crushed the individual, they said; it was communism.

In 1971, business lawyer and future Supreme Court Justice Lewis Powell actively enlisted business interests in the crusade. He urged the director of the US Chamber of Commerce to attack media, education, politics, and the courts in order to destroy the socialists who were attacking the American system of free enterprise.

The onslaught worked. Voters signed on to the goal of reducing handouts to lazy ingrates. In 1980, they put Ronald Reagan in the White House, and he promptly began to roll back regulations, cut taxes and slash social welfare programs. Wealth began to move upward.

Rather than acknowledging that their programs did the opposite of what they promised, the Reagan administration pushed movement conservative ideology by killing the Fairness Doctrine, an FCC regulation that required news to be honest, equitable and balanced. Immediately, talk radio hosts and Fox News started their own media, calling it “fair and balanced” because it gave airtime to the ideological narrative of movement conservatives.

Propelled by talk radio, movement conservatives gained control of the Republican Party in the 1990s. They purged from it as “RINOs” — Republicans In Name Only — all leaders who were willing to admit any role for government regulation or social welfare legislation. They vowed to oppose all taxes under any circumstances whatsoever, for without money, the federal government would be forced to shrink and cut regulation and welfare programs. Their ideology was absolute: The New Deal state must be destroyed. True believers, they would not compromise with Democrats or moderate Republicans, and as they refused to budge, they moved the window of acceptable policies closer and closer to their ultimate goal.

Republican reshaping of the government continued. By 2015, the top 1 percent of families took home more than 20 percent of income. Wealth distribution was 10 times worse than that: the families in the top 1 percent owned as much as the families in the bottom 90 percent. And yet the dismantling of the New Deal state was not complete because Americans clung to FDR’s signature programs: Social Security, Medicare and Medicaid. Donald Trump capitalized on movement conservative rhetoric in the 2016 election by turning the party’s racist and sexist dog whistles into bullhorns, but it was his promises to protect the New Deal state by expanding health care, bringing back jobs, “draining the swamp” and reforming taxes that put him over the top.

But his promises were a con. With majority control in Congress, Republicans are scrambling to deliver a final death blow to the New Deal. The Tax Cuts and Jobs Acts slashes taxes on the very wealthy and kills regulations with the idea that rich businessmen will invest their money into the economy to support workers — the same idea that Republicans embraced in the 1920s. The $1.4 trillion hole the bill creates in the deficit will require crippling cuts to Medicare and Medicaid: This is deliberate. The bill also repeals the individual mandate, the piece of the ACA that enables it to work. That cut follows Congress’ refusal to fund the originally bipartisan Children’s Health Insurance Program (CHIP).

Today’s Republicans would have fit right in to Hoover’s administration. Regarding social welfare programs, Utah’s Sen. Orrin Hatch noted: “I have a rough time wanting to spend billions and billions and trillions of dollars to help people who won’t help themselves — won’t lift a finger — and expect the federal government to do everything.” Iowa Sen. Chuck Grassley defended killing the estate tax because the repeal “recognizes the people that are investing, as opposed to those that are just spending every darn penny they have, whether it’s on booze or women or movies.” Conservative economist Stephen Moore, who advised Trump on tax policy, explained the Tax Cuts and Jobs Acts with crystal clarity: “It’s death to Democrats.”

Welcome back to the Roaring ’20s.