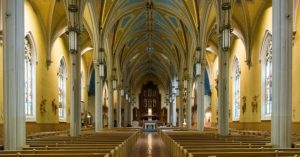 A 2016 poll found two-thirds of Americans say churches and other houses of worship should not come out in favor of one candidate over another during political elections—but President Donald Trump wants to “destroy” the amendment that keeps it that way. (Photo: Peter Miller/flickr/cc)

Draft executive order ‘reads like the administration was challenged to see how many violations of the Bill of Rights can be contained in one policy change’.

President Donald Trump appears intent on demolishing the wall between church and state, telling an audience on Thursday that he will “totally destroy” an amendment that bars religious tax-exempt organizations from engaging in political activity—while his administration reportedly circulates a far-reaching draft executive order on “religious freedom” that effectively legalizes discrimination.

Trump told attendees at the National Prayer Breakfast on Thursday that he “will get rid of and totally destroy the Johnson Amendment and allow our representatives of faith to speak freely and without fear of retribution.”

The amendment, passed in 1954, prohibits churches and other tax-exempt organizations from endorsing political candidates; repealing it—which Trump and Vice President Mike Pence also vowed to do on the 2016 campaign trail—”would theoretically allow houses of worship and religious leaders to openly advocate for political candidates while retaining their tax-exempt status, while also allowing them to funnel religious donations into explicitly political efforts,” according to Emma Green at The Atlantic.

Repeal would require action by Congress. A 2016 Pew Research Center poll found that fully two-thirds of Americans say churches and other houses of worship should not come out in favor of one candidate over another during political elections, while just 29 percent say churches should get directly involved in electoral politics in this way.

Meanwhile, The Nation and the Center for Investigative Reporting (CIR) revealed Wednesday that the Trump administration is circulating a four-page draft executive order that would, according to the center:

And “[i]t would create a section or group within the U.S. Department of Justice to enforce the order,” according to CIR’s outlet, Reveal.

Sarah Posner writes for The Nation: “The breadth of the draft order, which legal experts described as ‘sweeping’ and ‘staggering,’ may exceed the authority of the executive branch if enacted. It also, by extending some of its protections to one particular set of religious beliefs, would risk violating the Establishment Clause of the First Amendment to the Constitution.”

Or as the National LGBTQ Task Force wrote online, it would “completely destroy Church/State Separation to destroy lives and roll back fundamental rights.”

ABC News reported Thursday that “the draft appears to be among the hundreds of executive orders that are circulating—drafted by either the Trump transition team, the White House policy team, or even by outside groups—and that not all reflect administration thinking or likely policy. One official did not say who drafted this potential order, but did not dispute its authenticity.”

ABC further notes that the order contains language that “appears to be an attempt to roll back the Johnson Amendment” through executive action, as it “seeks to ensure tax-exempt status for religious organizations even if they speak out on beliefs opposing gay marriage, extra-marital sex, abortion rights, and rights for transgender individuals.”

In a statement, Citizens for Responsibility and Ethics in Washington (CREW) executive director Noah Bookbinder said Trump’s latest statements taken alongside the draft order constitute “a stunning assault on free speech, and a gift to dark money groups—as long as they agree with the president.”

Considered in the context of a post-Johnson Amendment landscape, the draft order “would eliminate longstanding restrictions on political speech by nonprofit organizations, and favor religion, allowing the government to penalize some political viewpoints by nonprofit organizations while protecting the opposite viewpoints, and would sanction discrimination against a particular group of people,” said Bookbinder. “It reads like the administration was challenged to see how many violations of the Bill of Rights can be contained in one policy change.”

He concluded: “The administration should immediately reverse course on this proposed executive order which could do nothing but catastrophic harm to our democracy.”