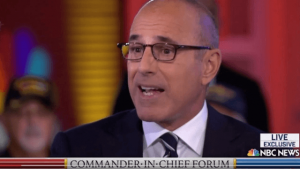 The verdict is most assuredly in: NBC’s Matt Loauer was Matt Lousy as the moderator in Wednesday night’s NBC “Commander-in-Chief Forum.” It featured Lauer interviewing Republican Presidential candidate Donald Trump and Democratic Presidential candidate Hillary Clinton. The reaction from most professional journalists was a combination of sadness for the state of their profession, embarrassment over Lauer’s performance, and perhaps in-vain hopes that the next debate moderators will study Louer’s performance as moderator and use it as a guide how not to moderate future debates.

OOPS! Fox News’ Chris Wallace has already vowed that he’ll remain mum if a candidate states a blatant lie, as Trump did on never supporting the Iraq War (go here and here). (Is Chris Wallace REALLY related to the King of Tough Follow Up questions, the late Mike Wallace?)

How bad was it? There are many ways to tell that Louer’s journalistic chops are now seen as thin as the hair on his shaved head. Here are just two:

#1: Not just the reaction of journalists (which means you automatically omit Shaun Hannity, Rush, etc.) but a CNN story quoting a “NBC Executive” as giving a brutal thumbs down on how Lauer did (or, rather, didn’t) do his job. Lauer’s performance — where he seemingly interrupted Clinton, threw tough questions at her and grilled her consistently, in contrast to some easy (news professionals would say sloppy) questions tossed to Trump — was called by NBCers “a disaster.”

NBC News knows the “Commander-in-Chief Forum” was not Matt Lauer’s finest hour.
One executive, speaking anonymously, was blunt about it: “Disaster.”
The day after Lauer’s back-to-back interviews of Hillary Clinton and Donald Trump, several high ranking sources at the network said they hear the criticism and agree with at least some of it.
Even his internal defenders acknowledge flaws in the forum’s production.
Lauer was widely criticized for failing to fact-check or follow up when Trump falsely claimed that he was opposed to the Iraq war when it started. Some viewers thought Lauer held Clinton to a higher standard than Trump. The Clinton campaign agreed — it blasted off a fund-raising email on Thursday afternoon titled “Matt Lauer.”

But this was not merely partisan warfare. Prominent journalists were sharply critical of NBC. And several people who were sitting in the audience told CNN that they were frustrated too.
The ratings for Wednesday night’s forum were strong — almost 15 million people tuned in.
But the reviews were pitiful. So what went wrong? That’s what journalists both inside and outside NBC are asking now. There is no clear answer.
Lack of preparation is one theory.
New York Times TV critic James Poniewozik wrote Thursday that Lauer seemed “unprepared on specifics of military and foreign policy: “He performed like a soldier sent on a mission without ammunition, beginning with a disorganized offensive, ending in a humiliating retreat.”
But Lauer’s interviewing skills are second to none. He has hosted thousands of episodes of the “Today” show.
And he had a week to prep for the forum.
The blame does not fall on Lauer alone. NBC News and MSNBC chairman Andy Lack, a longtime friend of Lauer’s, was intimately involved in the forum planning and execution. “This should be a black eye for Lack,” one of the sources said.
The executive producer of the forum was Mark Lukasiewicz, an expert at producing TV special events. He has been with NBC News since 2000
Others within NBC were considered as potential moderators. A source said Chuck Todd, Andrea Mitchell and Rachel Maddow all came up during the process.

Lack went with Lauer, and both campaigns supported the choice. (The Trump campaign almost certainly would have objected to Maddow as moderator.)
The time constraints — less than 30 minutes apiece with Trump and Clinton — were largely the fault of the candidates themselves, who resisted longer interviews.

(Read the report in full).

#2. Lauer’s flop and apparent lack of preparation zoomed through social media, especially on Twitter where analysts, reporters, and others lambasted or lampooned him.

In fact, a new Twitter craze became #laueringthebar, a play on lowering the bar journalistically, with many of the tweets highly critical of him or lampooning him about the kinds of questions he asked. It’s still thriving on Twitter.

Yours truly offered this one:

Is all this fair to Lauer? Talking Points Memo’s Josh Marshall looks at the entire hour and concludes he is really not being treated fairly — that he did grill Trump and Clinton, but did not do a terrific job.

The conventional wisdom has hardened to granite. Matt Lauer was the worst debate moderator in history. He was unprepared. He hammered Hillary and devoted too much time to emails. He let Trump lie like crazy without calling him to account at all. He probably threw the election, made Trump president and nudged us down the hill toward the apocalypse. I don’t agree. I don’t think he did great. I partly agree with the criticisms. But I think he did considerably better than people are giving him credit for.

He makes his case then concludes:

Commentators tend to fall in love with their theories and then overdue them because of that love and self-regard. I hope I’m not doing that. I don’t think Lauer did a great job. He devoted too much time to the email issue. There were various times where I suspect that he was just overwhelmed by Trump’s nonsense and didn’t know where to start in correcting him. He certainly should have piped up when Trump falsely claimed that he’d been against the Iraq War when we have so much proof that that’s a straight up lie. But he did press Trump and he came back at Trump, albeit in fairly soft ways, which prompted Trump to double down or expand on moronic or transparently ridiculous arguments. Maybe I’m giving Lauer too much credit and he was just the Mr Magoo of Trump moderators, blindly and luckily walking into saying things that made Trump make a fool of himself. But I don’t think that’s quite the fullness of what happened.

At some level people, especially liberals, are thinking that viewers are idiots and that the moderator needs to go into some sort of moderator primal scream mode saying ‘No, you’re lying. You keep lying. Please stop lying!!!’ Sometimes that really feels necessary. Sometime it truly is necessary. But that’s not necessarily the most effective way to go about it.

Remember, one of the things that charmed people about Bush was that he didn’t claim to be an expert. Trump is definitely an expert, according to Trump. On everything. He’s smarter than the generals. He’s smarter than everyone at the VA. He’s never wrong. About anything. And yet he says we should have brought the oil back with us from Iraq – something that almost anyone can figure out simply makes no sense.

I’ve never met Matt Lauer and I never watch early morning TV. I’m either working or asleep. I have zero investment in Lauer doing well or terribly. But he didn’t do as badly as people are claiming. He came at Trump more than people are saying and he pressed Trump to expand on and double down on being Trump. And that did not go well for Trump. Not at all.

Fair enough. One other view. But having watched the debate, I’m a bit less charitable due to Lauer’s lack of follow ups with Trump. I saw the first part with Clinton and assumed the second segment with Trump would be just as tough with a tough opening question. It wasn’t. He seemed to be tough on Clinton and lowered the bar for Trump.

There is a prevailing problem now in the American news media that some journalists and editors are grappling with: many reporters (some openly) are “lowering the bar” for Trump, which is in effect an in kind donation to his campaign.

If journalists lower the bar on Trump when he runs, does that mean the United States of America needs to lower the bar if he becomes President, too?