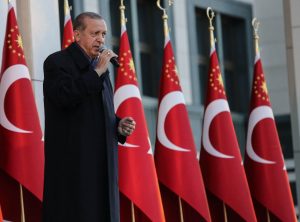 After a long campaign, President Tayyip Erdogan has finally achieved his long-sought goal to rewrite the constitution.

Pots and pans, whistles and hoots erupted in alleyways in Istanbul, the city where a majority of citizens voted “No” in Turkey’s referendum last week. Thousands crowded the streets and booed, cried, and yelled, “We protest,” numbing the air with the sound of their discontent: President Tayyip Erdogan claimed victory in the historic electoral exercise to expand the powers of his office.

For a leader of a republic who worked so hard to get the “Yes” vote, getting only 51 percent of votes is almost as bad as losing. Nonetheless, after a long campaign, he has finally achieved his long-sought goal to rewrite the constitution — a move that, as we’re already seeing, is dividing the country in two.

The regional — ongoing wars in Syria and Iraq that have triggered an overwhelming refugee influx to Turkey — and internal — threats of terrorism and economic collapse — instability in the last few years has made Erdogan attractive to many in the country who are desperate for stability. This is why Erdogan’s tendency to call his opponents “traitors” and “terrorists” worked so well for him, and brought him acceptance and even admiration from people willing, out of frustration and exhausted patience, to bestow their trust in him.

So when state-run media declared, prematurely, that Erdogan had won, his devotees were also out on the streets, celebrating. Men and children danced while old ladies in scarves kissed Erdogan’s face on flags. But he understands this very well, that only half of the nation paved his way — with a “Yes” vote — to the country’s first-ever executive presidency. Erdogan takes up the mantle of leadership in 2019, giving him two years to tighten his grip on power.

Erdogan kicked off the occasion with a speech, first carefully thanking the nation for coming out to vote — and then immediately telling the citizenry that he wants to reinstate the death penalty. Talk of bringing back the death penalty — where prisons are already full, and cells often hold eight prisoners instead of three — immediately throws students, teachers, doctors, academics, and journalists into a paralyzing state of anxiety. It also empowers the other half of the country, the half that feels righteous and full of contempt for those who voted “No” — the “traitors.” “Our time has come, we will crush them,” Selim Atalay, 43, a shopkeeper in Istanbul and Erdogan supporter, told me.

All of a sudden, critics are rigid with fear. “Although we were never a truly democratic country, we were trying, and we had hope,” said Ipek Ozel, a professor based in Istanbul. “Now look at what has happened. How can a democratic country be allowed to change a constitution with only half the country saying “No,” with elected parliamentarians in prisons, [with] any opposition accused of being a terrorist?”

The new constitution presents many problems for Erdogan’s critics, but the deepest source of agitation is that it’s tailor-made to complement Erdogan’s power grab.

Indeed, the most apparent takeaway from this referendum is a country that’s been cleaved down the center. Turkey has fallen into an abyss of mistrust, something I have witnessed on the streets many times: two people looking at each other with disgust in their eyes as if they stood in front of an enemy neither understood.

Yet to understand where Turkey will move from here, it is important to know why the nation voted “Yes” — and it looks like fear was felt not only by those opposed to Erdogan. Many of those who voted “Yes” did so because they feared for their safety, feared having to navigate a crushing economy, feared their neighbors, colleagues, the media, the judicial system, the military, and their fellow countrymen who could harm them. In short, many “Yes” voters feared Erdogan himself. “He will track down everyone who voted Hayir [‘No’] and then they will suffer, so why not just vote ‘Yes’ and get out of his way?” many people told me.

The “Yes” vote, at least to an extent, was also a fear vote.

Erdogan doesn’t seem to have a plan to tackle the many challenges awaiting him. The only statement given by his spokesman, Ibrahim Kalin, about rule by Erdogan is that “stable governments have been able to handle crises more effectively, implement structural reforms in due time, and render the investment climate more favorable by increasing predictability.”

Various regional and international crises demand that Erdogan stitch up his torn relationship with the West. To do this, he must correct his inglorious record of human rights abuse. He would also have to free journalists and parliamentarians who have been unjustly thrown in jail and stop vilifying his opponents. (On that note, he’d also have to make some weighty apologies.) The question, of course, is how much of this will he do.

Charisma and popularity might work in the present, but Erdogan also needs to consider his legacy, and the time to build — and test — that legacy begins now. What legacy does Erdogan want for himself? When history looks back at him, what will it see? The president who brought equality, justice, and international respect to Turkey — all the things some of his supporters believe only he can do? Or will he be the president who excited a nation with pledges for peace while simultaneously carrying out a blood bath — which describes the general unease of his opponents? If he carries out the same abuses as he has, especially over the past two years — bombing and imposing curfews on Kurdish regions and on southeastern Turkey, as well as imprisoning dissenting voices from any corner of the opposition — he will be forever etched into history as a loser — a powerful loser, but a loser nonetheless.

As Ipek put it to me, poetically, “Who knows if he really won, or what it is he has won?”