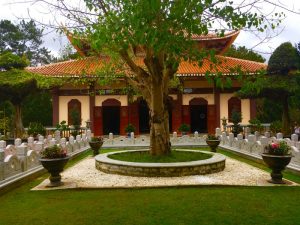 When I decided to go to Southeast Asia, one thing I wanted to do was join a monastery and learn about Buddhism. Some people advised me that I wouldn’t find monasteries to join in Vietnam, my first stop. I visited pagodas all over the country, but always just as a tourist.

It wasn’t until I reached Da Lat, a cute city in the South, that I finally had some sort of deeper experience with Buddhism. And it all happened by chance, as do the best experiences in life!

It was a sunny day in Da Lat, a perfect day for a bicycle ride. I chose to go up the mountain to a monastery close by, more because of the ride than because of the place itself, unaware that this was the beginning of a peaceful journey and my encounters with meditation.

Arriving there, I discovered that Truc Lam Monastery isn’t just another pagoda. Its location, on the top of a mountain, along with the cool climate and the colourful gardens that surround the temple, make this one of the most peaceful places I’ve ever been. You can easily spend the day there.

After walking around a bit, I noticed some people eating lunch, and because I love Vietnamese food, I asked if I could join them. A monk pointed me towards the master teacher, a joyful man with a great sense of humour, who invited me for lunch while we chatted a little in Spanish.

Following that, the master told me that it was possible to come as a guest and learn how to meditate with the nuns. This was a sign! It was exactly what I’d been hoping for before I came to Asia … joining a monastery and experiencing life with nuns. So, without hesitation, I agreed to come the next day at 6 a.m., although I had no idea what I was getting myself into. 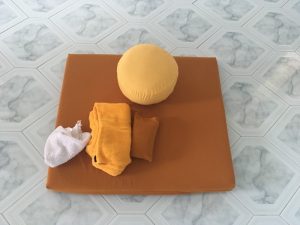 The next day, I couldn’t believe it, but there I was! The nun in charge greeted me, gave me an outfit to wear and showed me to my room. Very few words were spoken.

With my clothes changed, it was time to have breakfast. At the monastery, this is a ritual that involves a lot of chanting and mindful movements. There’s not much talking, and that day, I felt awkward trying to copy the ways of my colleagues, a group of nuns-to-be, around the table. Most of them were in their 20s.

After eating delicious vegan food, it was time to do some work around the house before my first meditation lesson.

The nun who’d given me my clothing gave me a square cushion and another small one that would lift my body. She asked me if I could sit in full lotus position. What?! I tried, but didn’t get anywhere close to that. She laughed at my clumsy ways and total lack of flexibility, and eventually gave up on showing me how to do it. With a lot of effort, I tried my best to sit in a position that would at least resemble hers.

Surprisingly (to me), Zen meditation involves a lot of bodywork—stretching and, at least to this stiff body of mine, pain. As I tried to maintain my “great” non-lotus posture, my duty was to count my breaths, going up to 10 and then starting again.

What could be simpler than that, right? Well, try it and tell me! I lost count. I counted up to 30 or so and started thinking of the most useless things. It was then that I began to understand how difficult this thing called meditation, this art of emptying the mind and focusing on the now, actually is.

Being “present” at meals

After meditating, or at least trying to for 30 minutes, it was time for lunch. The ritual was similar to that of breakfast. Again, we started with chanting, and proceeded to eat delicious vegan food without speaking.

The idea, one nun later told me, is to focus on the food during meals. In fact, the whole idea behind meditation and Zen Buddhism is developing the ability to be present in the moment. This may sound like a simple task, but can be very hard to achieve. 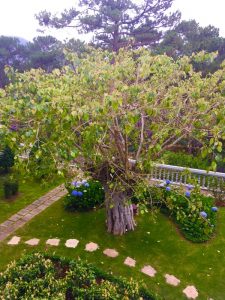 Having eaten and washed the dishes, it was time for a nap ’til 2 p.m., followed by more meditation. I was given some books that would help me understand meditation and Buddhism a bit better, and I could read them in my spare time, while looking at the marvellous gardens. In this monastery, they really take care of the gardens well. You can see nuns working on them most of the time, and this was one of my favourite jobs there, helping the nuns in the garden.

They also grow some vegetables and fruits that are used for the meals. Of course, I wanted to see how they cooked such delicious food. The kitchen is huge, as there are almost 200 nuns in the monastery, and they use firewood—that’s the secret!

In the following days, my routine would be similar: chanting, eating, meditating, reading, doing some work around the house and contemplating the beautiful gardens. I also had the chance to speak to some nuns. One, in particular, was keen to speak to the two foreigners there. She was 20 years old and had joined the monastery the year before.

The young nun told me that prior to coming to the monastery, she’d been feeling empty, working hard in a company without time to do the things she enjoyed. She began to question what the point was of working her whole life so she’d finally be able to do the things she enjoyed when she was old. We all ask ourselves this question at some point, don’t we?

She told me that at the monastery, she felt happy and could study and dedicate herself to what she enjoyed. She wanted to learn Buddhism so she could help others with a desire to lead better lives. She was such a cheerful and happy young lady with mature and lucid words. Talking to her reminded me that we’re all searching for a meaningful life and that there are many different paths we can to choose to pursue this.

I visited the monastery every day for four days. I wasn’t allowed to sleep there, but could stay until around 7 p.m. to join the evening chanting. Although I didn’t stay a very long time, the quality of the time I spent there was immense. I’m still digesting all that I learned from just watching life peacefully, eating quietly, speaking less and simply counting my breaths.

Meditation and Buddhism are both such simple concepts to read about, yet they’re so difficult to experience. They’re both part of my journey through life now, and I hope to learn more and more about them each day.