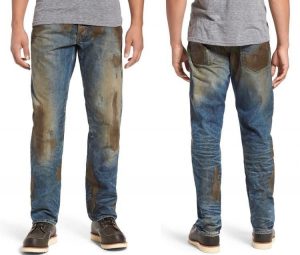 For the past couple of days, fashion retailer Nordstrom has been the butt of a lot of jokes on social media, after it was revealed that it is selling a pair of jeans caked in fake mud for a whopping $425.

The Barracuda Straight Leg Jeans are apparently brand new, but make you look like you’ve just finished feeding your pigs, or you just fell in a ditch after a wild night of partying. They look filthy, but that’s apparently the point, as Nordstrom claims the mud “shows you’re not afraid to get down and dirty.” 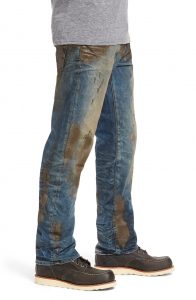 The description on the Nordstrom website explains that the mud-caked jeans “embody rugged, Americana workwear that’s seen some hard-working action.” Ironically, they are made in Portugal, by a company called PRPS, which specializes in distressed jeans covered in holes, rips and patches.

Photos of the Barracuda Straight Leg Jeans went viral online recently, with people leaving all kinds of snarky reviews on the Nordstrom website. 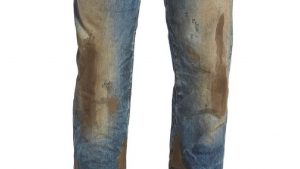 “Gotta love being able to look like I have fed the pigs, helped deliver a calf, and get the tractor unstuck without ever having to leave my BMW. Love it,” one person wrote.

“These are perhaps the best jeans I’ve ever owned. Perfectly match my stick on calluses,” another commented. 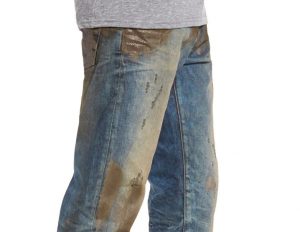 Nordstrom eventually removed the reviews, but the onslaught continued on Facebook, Twitter and the comment sections of major news sites. They even got a comment out of Mike, Rowe, the famous host of popular Discovery Channel show “Dirty Jobs”.

“The Barracuda Straight Leg Jeans aren’t pants. They’re not even fashion. They’re a costume for wealthy people who see work as ironic – not iconic,” Rowe wrote on Facebook. 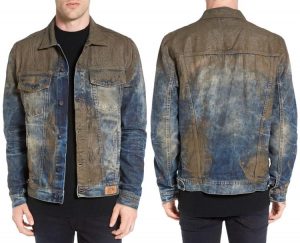 Ainsley Eardhardt of Fox&Friends apparently shares the same opinion. “It’s for the trust fund baby. It’s for the kid who inherits the millions of dollars, the kid who doesn’t want to work hard and wants to go into Nordstrom, pay a lot of money and act like they work,” she said on the show.

But if you’re one of the few people who actually find these $425 pre-muddied jeans cool, I’ve got a tip for you. You’re going to love this . PRPS also makes a matching $425 fake mud-caked denim jacket, so you can really rock the dirty job look. And guess what, Nordstrom is also selling that one. You’re welcome!