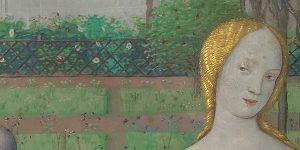 A tour through sumptuous Renaissance gardens depicted in illuminated manuscripts.

Gardens are rich with associations: the Garden of Eden is an earthly paradise; botanical gardens are places to study and appreciate the world of plant life; our home herb and flower gardens are sites of pleasure, sustenance, leisure, and sometimes chore.

The gardens we encounter in works of art from the Renaissance in Europe, from about 1400 to 1600, similarly reveal a range of meanings and functions—several of which resonate with our own contemporary ideas. Here is a visual introduction to Renaissance gardens and their symbolism, with images drawn from illuminated manuscripts in the Getty Museum’s collection. 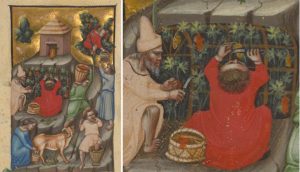 A kitchen garden—hortus in Latin or orto in Italian—was often part of a landed estate or attached to a simple home. These sites produced plants for sustenance and profit, often providing taxable income. In the illumination above, individuals harvest the plantings from a vineyard and orchard.

The urban garden, or hortus urbanus to borrow a phrase coined by the 15th-century theorist Leon Battista Alberti, combined the dignity of a city house with the delights of a country villa and provided a place free from the restrictions of urban society. These gardens were sites of contemplative withdrawal. In the illumination here, angels tend a garden attached to the Virgin Mary’s home, pictured here with early-16th-century architecture.

An herb or simples garden was often located near a private residence, a pharmacy, or university, and was used for the production of medicinal remedies. Here a young couple watch as gardeners till the soil in the garden in early spring. 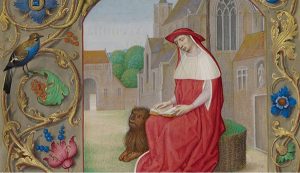 The gardens found in monasteries or cloisters were often referred to as paradise on earth, a reference to the Garden of Eden, portrayed here—in another beautiful example from the Spinola Hours—with lush colors and abundant green.

The botanical garden got its start in Renaissance Italy (in Padua, Pisa, and Florence), and spread throughout Europe, including to sites within the Holy Roman Empire under Emperor Rudolf II. Many of the specimens found in his botanical garden can be seen today in the Model Book for Calligraphy, illuminated with spellbinding precision by Joris Hoefnagel. 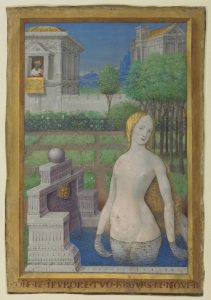 Gardens at Renaissance courts were large giardini connected to Italian villas or luxurious jardins found in French châteaux. Gardens such as the Boboli gardens in Florence, or the luxurious green spaces at the Château de Fontainebleau in France, represent the height of villa and château gardening in the 16the century.

These spaces provided pleasure, not necessarily profit, as hinted in this illumination of Bathsheba bathing. 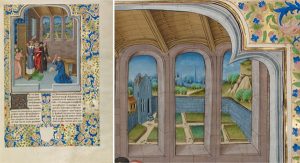 One specific type of courtly garden is the so-called secret garden (giardino secreto). The name did not imply a hidden space, but rather one that was distinguished, set apart, or reserved for the privacy of an estate owner and his closest associates, such as the garden seen through the window here. 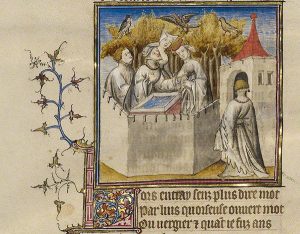 In addition to serving different functions, Renaissance gardens also carried a range of associations, both literary and biblical. The Garden of Love, dedicated to the goddess Venus, was a pleasure garden of virtue and vice—suggested here by the position of the man’s hand at center. 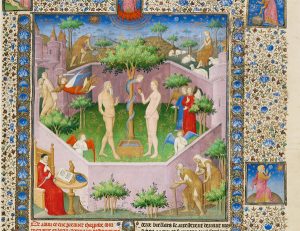 The biblical Garden of Eden was most often referred to as “paradise,” a word that evoked the notion of an untouched and primal landscape, a true locus amoenus, or pleasurable space, as in this lush landscape of greenery and gold. 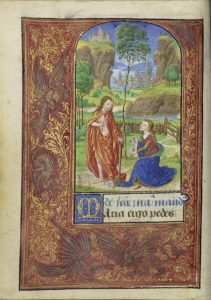 Christ is associated with Jerusalem gardens, where, according to the Bible, he prayed and was betrayed on the eve of the crucifixion and where he was buried and resurrected. Upon Christ’s resurrection Mary Magdalene initially mistook him for a gardener, and thus artists in the Renaissance, as in this leaf by Lieven van Lathem, often depicted him holding a shovel.

Gardens are cyclical, impermanent, and ephemeral–“ever changing, never twice the same,” to borrow Robert Irwin’s words about the Getty Center’s Central Garden. But in some instances, inheritors of Renaissance gardens attempted to preserve their character, as is the case at Boboli, Fontainebleau, and other major sites today.

In a genealogical manuscript in our collection, we find in Nuremburg a house and garden, built and cultivated in the year 1502 and appearing virtually unchanged until the mid-17th century, when the manuscript was made. The artist provided two aerial views of the site, one in the main image and the other drawn at left. Thanks to Google Maps, we can actually locate this garden—and are surprised and delighted to see that its design is largely the same as it was when the manuscript was illuminated, over 300 years ago. 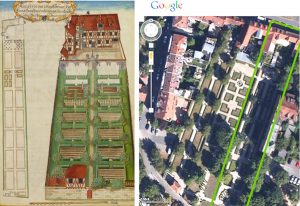 The Nuremberg Residence and Garden of Magdalene Pairin in Genealogy of the Derrer Family, about 1626–1711, Georg Strauch. Tempera colors with gold and silver highlights on parchment, 14 13/16 x 10 1/4 in. The J. Paul Getty Museum, Ms. Ludwig XIII 12, fol. 130bis. At right, aerial view of the garden today via Google Maps, with the garden depicted in the manuscript outlined in green.

Gardens come in myriad forms and represent a plethora of ideas about the natural world and the cultivated landscape, ideas that change with time and geography. What associations do you make with gardens?