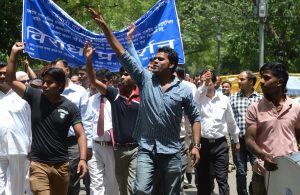 Indian activists from the Scheduled Castes and Scheduled Tribes (ST/SC) organization demonstrate in support of India’s Dalit or lower caste in New Delhi on May 9th, 2014. (Photo: Raveendran/AFP/Getty Images)

Members of a new generation of lower-caste Indians are poised to make major changes in the world’s biggest democracy.

What should be the cover story this month? Ashok Das is pondering this question at the office of Dalit Dastak, a monthly magazine and news website dedicated to the issue of social justice for Dalits — the untouchables, members of India’s lowest castes. The one-room office is located in a crumbling building in a residential colony in east Delhi. As the editor, chief reporter, and publisher, Das will make the decision on his own. He lists the choices: the ongoing protests within the Dalit community, the role of social media in fomenting the protests, the rise of Dalit youth politics on campuses, and a new generation of middle-class Dalits asserting their identity.

“This anger had to come out; we have been weak and powerless for too long,” says Das, a 32-year-old Dalit who says he gave up his job in mainstream media after he faced discrimination in the newsroom. “We are now ready to hit back.”

Caste has long been India’s dirty secret, its hidden apartheid.

The same anger is reverberating across India. It started with a video, posted on social media. Four young men, stripped to the waist, chained to a vehicle, paraded in public and thrashed for hours, by a gang of cow-protection vigilantes wielding iron rods. The victims, flogged for having skinned a dead cow, are Dalits, who were only doing their job — one that upper-caste Hindus consider impure: The cow is a sacred animal for Hindus in India, where many states have banned the slaughter of cows and the eating of beef; the disposing of dead animals, and their skinning to produce leather, has been carried out by Dalits for generations. The situation has become increasingly fraught, as cow-protection vigilantes, belonging to dominant castes and egged on by a right-wing government in power, have found a way to torment Dalits in the name of the holy cow.

The incident took place in July, in Una, a small town in the western state of Gujarat. In retaliation, Dalits dumped cow carcasses outside government offices. More than 30 Dalits in the state of Gujarat attempted suicide in protest. On August 15th, India’s Independence Day, they staged massive rallies and marches.

Two months on, the aftermath of Una is still being felt.

In the usual course of things, the thrashing of Dalits would have registered as just another atrocity against Dalits, and India would have moved on. That’s what happened, anyway, when the massacre in Khairlanji took place 10 years ago, when four members of a Dalit family were paraded naked, sexually abused, and then hacked to death by a mob of men belonging to the dominant caste. In the intervening years, crimes against Dalits have gone up by more than 245 percent in the last decade. Caste has long been India’s dirty secret, its hidden apartheid.

The Una affair has forced some questions into the mainstream. How long can India ignore the exclusion, discrimination, and human rights violations propagated by the centuries-old caste system? The seeds of Una were planted earlier in the year, in January, when Rohith Vemula, a Ph.D. student at the University of Hyderabad, committed suicide after facing caste discrimination in campus. His last words, “My birth is my fatal accident,” inflamed the conscience of a nation.

Indeed, Vemula’s suicide stirred Dharma Teja, a 28-year-old software engineer in Hyderabad, to pick up a camcorder and become a volunteer with the YouTube channel Dalit Camera. For weeks and months, Teja recorded the testimonies of the protesting Dalit students. “Mainstream media is extremely casteist, its perspective is limited and problematic. We want to disrupt the dominant caste narrative,” Teja says. Similarly, Pardeep Attri, a student in London, and founder of the portal, Ambedkar Caravan, which has 80,000 followers on Facebook, found that Dalits needed their own medium to raise the issues that matter to them. Multiple online forums like Round Table India, Dalit Nation, and Dalits Media Watch are compiling incidents of violence, along with criticism and commentary, to build a nuanced interpretation of Dalit identity in contemporary India.

“Our challenges are strikingly similar to what the Romas face in Europe, or blacks in the United States, and if we stand together the demands and articulations of each community becomes so much more powerful.”

“Dalit movement has been going on at the ground level for a long time, and it will continue to grow as more and more Dalits get educated about their rights,” Attri says. He goes on to emphasize how social media has brought together marginalized communities around the world, including the Romas of Central Europe, who have been influenced by the teachings of the Dalit icon B.R. Ambedkar. Both groups share a history of oppression, and Romas have found inspiration for their struggle in the Dalit resistance movement: There have been civic society engagements between the two groups over the last few years, with the United Nations commissioning various reports on the discrimination faced by both peoples. More recently, a report by the U.N.’s Special Rapporteur on Minority Issues, Rita Izsák Ndiaye, who is a Roma from Hungary, takes a stringent stance on caste discrimination in India, characterizing it as a global affliction.

The history of the movement for Dalit solidarity is long and varied, stretching back to 19th-century India under British colonial rule, with several icons emerging around that time. In the first half of the 20th century, B.R. Ambedkar — the politician, social reformer, and jurist who drafted the Indian Constitution—fought for the annihilation of caste, and Dalits continue to find inspiration in his legacy. Ambedkar, who studied at Columbia University, had drawn parallels between caste and race — between the discrimination faced by Dalits and that faced by blacks — and argued that untouchability was worse than slavery. In the 1970s, the Dalit Panther Movement drew inspiration from the Black Panther Party, and, in 2016, the popular hashtag and slogans “Dalit Lives Matter” and “Dalit Women Fight” are inspired directly by Black Lives Matter. 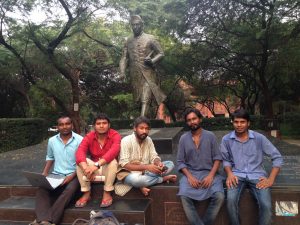 Last year, members of Dalit Women Fight, an advocacy group for Dalit women, based out of Delhi, traveled on a two-month field trip to the United States to study the history of resistance shared by black and Dalit movements. They met with members of Black Lives Matter to discuss the idea of global solidarity between oppressed communities. Asha Kotwal of Dalit Women Fight says that the concept of an international collective of minorities is steadily gathering steam: “Our challenges are strikingly similar to what the Romas face in Europe, or blacks in the United States, and if we stand together the demands and articulations of each community becomes so much more powerful,” Kotwal says.

In their interactions with Black Lives Matter, Kotwal says, “There were lessons for us on how make a movement self-sustainable, while BLM was impressed by how we have been taking our movement offshore to international advocacy groups.”

In the writings and speeches of Ambedkar and Malcolm X, Rahul Sonpimple has found the vocabulary he needs to express himself. It nearly won him an election: A Dalit student of sociology at Delhi’s premier Jawaharlal Nehru University, Sonpimple ran for university president under the newly formed students’ organization, BAPSA, which stands for the rights of minorities. The success of the party is being seen as a harbinger of change. Dressed in frayed jeans and a blue kurta (the color favored by Ambedkar, and a symbol of Dalit empowerment), Sonpimple makes an effective argument for the revival of Ambedkarite politics, a form of politics that promulgates the ideals of justice and equality. “I see the Dalit movement as a daily fight. For too long, others have spoken for us and tried to appropriate our cause. But we can speak for ourselves,” Sonpimple says. “As the oppressed, we do not need a leader, we will lead ourselves.”

Sonpimple represents the point of view of young Dalits around the country who are no longer ashamed of their identity. The Internet is flooded with stories of young Dalits in cities — who once hid their identity and pretended to be upper-caste — coming out and taking pride in their heritage. With education, economic mobility, and urbanization (enabled to an extent by India’s caste-based reservations, a positive discrimination that favors quota system in education, employment, and assemblies for the disadvantaged), an entire generation of Dalits is not demanding justice, but rather claiming it as their right.

“The mobilization we are witnessing is not political. There is no leader and everyone is a leader,” says Vivek Kumar, who teaches at the Centre for the Study of Social Systems in Delhi. Kumar feels that the government’s current policies are not enough for this generation of Dalits. They need more. “We must strengthen the right to self-representation of India’s Dalits in every institution,” he says. “We need to take cues from America, where the government has implemented affirmative action in an honest spirit.”