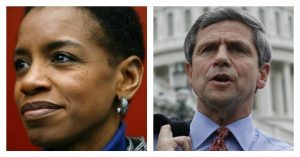 ‘What I want to know from my Democratic Party is…when will our voices be effective, legitimate, equal leaders?’

Van Hollen won against Rep. Donna Edwards, both of whom were running to replace Sen. Barbara Mikulski, in a contest that highlighted racial, gender, and class divides in the Maryland Democratic Party.

A win for Edwards—who had grassroots support but few powerful political allies—would have made her Maryland’s first black senator and the second black female U.S. senator in history. Despite a record turnout from black voters, her campaign came up against an establishment firewall that had long backed Van Hollen, a white man and career politician, whose policies are markedly more centrist.

“To my Democratic Party, you cannot show up in churches before election day, you cannot sing the first and last verse of ‘Lift Every Voice and Sing,’ you cannot join hands and walk across the Edmund Pettus Bridge, and call that post-racial and inclusion,” she said to cheers and applause.

Meanwhile, in Pennsylvania, progressives saw McGinty’s win over Joe Sestak as another example of establishment game-playing.

The Democratic Party’s anointment of McGinty, a former chief of staff for Pennsylvania Governor Tom Wolf, came as an explicit response to Sestak’s candidacy. The former congressman burned bridges with the party in 2010 after beating Sen. Arlen Specter for the Senate nomination, then losing to Republican Pat Toomey by two points, a race he says Democrat officials never forgave him for. As the Atlantic writes:

[N]ational Democrats see Pennsylvania as key to achieving an increasingly feasible goal: taking back the Senate. And they’re virtually united in their support of candidate Katie McGinty to beat […] Toomey in the fall.

A relative newcomer to elective politics, McGinty used the endorsement of President Obama and more than $4 million in spending on her behalf from outside liberal groups to knock off former congressman Joe Sestak, whose solo style of campaigning sparked a bitter feud with Democrats in Washington. After a truce effort failed last year, Senate Democrats worked to find someone other than the former Navy admiral to run against Toomey, believing Sestak’s quirky personality would hurt them in such a key contest.

While Sestak has indicated he is proud not to have establishment support—evoking Bernie Sanders’ rejection of same in his presidential run—he also acknowledged that the ire he faced was payback for his independent streak.

In order to win support from powerful colleagues, he told the New York Times on Monday, he was instructed to follow orders from party officials.

“One of the senators said, ‘Joe, you have a reputation for independence, we’re going to have to work on that,'” he told the Times. “I don’t think I’ve ever been forgiven” for his run against Specter, he added.

As Bloomberg political reporter Sahil Kapur put it on Twitter, “That sound you hear is the [Democratic Senatorial Campaign Committee] breathing a huge sigh of relief that they won’t have to deal with Joe Sestak anymore.”

Hillary Clinton also won the presidential primaries in Maryland and Pennsylvania on Tuesday, rounding out both states’ establishment lineups.