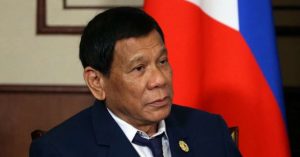 Less than two weeks ago, a senior U.S. official said Trump and Duterte have “a warm rapport.”

Philippine President Rodrigo Duterte—with whom President Donald Trump has “a warm rapport“—again boasted of murdering someone, this time when he was just 16, and threatened to physically assault a United Nations human rights expert.

Duterte, who’s been waging a deadly “war on drugs” and has come under fire for unleashing “a human rights calamity” in his country since he took office, made the comments Thursday to regional leaders in the Vietnamese city of Da Nang, where the Asia-Pacific Economic Cooperation summit is taking place.

He said he’d “go in and out of jail” as a teenager. “At the age of 16,” he said, “I already killed someone. A real person, a rumble, a stabbing. I was just 16 years old. It was just over a look. How much more now that I am president?”

“You f**k with my countrymen, I won’t let you off the hook. Never mind about the human rights advocates,” he added.

Duterte’s spokesperson, Harry Roque, suggested the comments were “in jest.”

The Philippine leader also lashed out again at United Nations human rights expert Agnès Callamard, the Special Rapporteur on extrajudicial, summary, or arbitrary executions. She’s been a critic of Duterte’s approach to tackling the drug crisis, and denounced the government for carrying out “possible extrajudicial killings” and “a massive, government-led, human rights crisis.”

In his fresh remarks, Duterte suggested Callamard was overly concerned with his government, asking, “What makes the death of people in the Philippines more important than the rest of the children in the world that were massacred and killed.”

“What have you been doing all the time? Why are you so fascinated with drugs?” Duterte said.

“I will slap her in front of you,” he said, referring to Callamard by name. “Why? Because you are insulting me.”

Trump, however, has praised Duterte’s “unbelievable job on the drug problem,” and told the leader he’s “a good man” and should “Keep up the good work.”

The pair are set to have a face-to-face meeting in the coming days when Trump finishes up his Asia trip with a stop in Manila.

The Guardian writes of the meeting: “This is one to watch: two of the world’s most bad-tempered leaders with a penchant for unscripted remarks, both in the same room.”

If, during the meeting, Trump broaches the subject of human rights, Duterte said earlier this week that he’d tell the U.S. president to “lay off.”

“You want to ask a question, I’ll give you an answer. Lay off. That is not your business. That is my business. I take care of my country and I will nurture my country to health,” Duterte told reporters before leaving for Vietnam.

When a senior U.S. official said two weeks ago that there was “a warm rapport” between the two administrations, Phelim Kine, deputy Asia director of Human Rights Watch, said it “suggests a stunning apathy toward the human rights calamity that Duterte has inflicted on the Philippines since taking office.”

“Trump’s explicit eagerness to meet with the architect of a killing campaign that has resulted in the deaths of more than 12,000 men, women and children over the past 16 months is more than a grievous insult to injury for family members of victims,” Kine said.