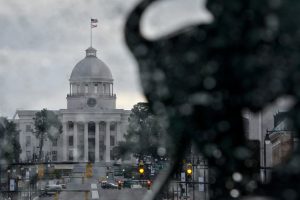 Authorities could no longer charge a pregnant woman with child endangerment for taking a drug prescribed by her doctor.

This story was co-published with AL.com.

Pregnant women and new mothers using legally prescribed medications may no longer face prosecution under an Alabama statute that is the nation’s harshest law against drug use during pregnancy.

The Alabama House of Representatives passed a bill Tuesday to exempt women who use medically prescribed drugs from the state’s chemical endangerment law, which makes it a felony to expose a child to “a controlled substance, chemical substance, or drug paraphernalia.” The measure had cleared the Senate in April.

If signed by Republican Gov. Robert Bentley, it would be the first significant change to a controversial law that has been used to arrest and prosecute more than 500 women over the past 10 years, including some who used drugs under a doctor’s care. Whether Bentley, a dermatologist, will sign the measure into law wasn’t immediately clear.

A ProPublica investigation with AL.com last year exposed disparities in prosecution under Alabama’s chemical endangerment law, which was passed in 2006 and initially targeted parents who exposed children to methamphetamine labs.

Prosecutors and courts, however, have extended the law to apply to women who use drugs during pregnancy. As written, the statue did not address pregnancy. Nor did it include guidance for police, prosecutors, doctors or hospitals, on how to deal with women who used prescription painkillers or other medications.

As ProPublica and AL.com reported, many women have been turned in to authorities by hospitals that conducted drug tests without explicit consent.

One of the women profiled was Hanna Ballenger, a Cullman County mother who was arrested in 2014 after her baby tested positive for methadone. The drug had been prescribed by her doctor and closely monitored during her pregnancy. She was charged with a Class B felony, carrying up to 20 years in prison, and lost custody of her son.

According to medical experts, a woman who stops using methadone or other opiates during pregnancy risks having a miscarriage or a premature baby. As such, the standard of care is to continue the medication and treat the newborn for any withdrawal symptoms, a condition known as neonatal abstinence syndrome, or NAS.

Ballenger’s son, Case, was born with NAS but quickly recovered. “I got charged for being on methadone, and he’s healthy,” Ballenger said last year. “But if I had come off the methadone cold turkey, and he had died, they would have arrested me for killing him. I would have gotten charged either way.”

She eventually pleaded guilty in exchange for five years’ probation.

Under the bill, defendants such as Ballenger would not face arrest and prosecution if they use a controlled substance as directed by a medical provider, or if they have “a good faith belief” that their prescription was lawful.

“It’s just to clarify the law,“ one of the bill’s sponsors, Sen. Clyde Chambliss, R-Montgomery, told AL.com. ”If a woman is taking a drug prescribed by a doctor, and it unintentionally causes harm to the fetus, she should not be prosecuted.”

Steve Marshall, the district attorney of Marshall County and a leading proponent of using the chemical endangerment law to push addicted women into treatment, expressed support for the measure.

“I believe it simply adopts our current practice and would not change anything we do here,” he said in an email. “I think it is a fair amendment.”

Alabama is one of three states that permit women to be arrested and prosecuted for drug use during pregnancy. It is the only state that has allowed such arrests from the earliest stages of pregnancy, even if babies are born unharmed.

A law in Tennessee that allowed drug-using mothers to be charged with assault expired earlier this year.

The Chambliss bill, SB372, was one of two changes to the chemical endangerment law proposed by the Alabama Health Care Improvement Task Force. The group also suggested that all women arrested for drug use during pregnancy first receive court-ordered treatment instead of incarceration. That proposal is on hold.

Chambliss told AL.com that did not know if Bentley would sign it. Because the bill was passed so late in the legislative session, the governor could let it die without his signature, known as a pocket veto. Dave White, Bentley’s health policy adviser, said the measure had not yet been sent to the governor’s desk.

Farah Diaz-Tello, an attorney with National Advocates for Pregnant Women, welcomed the bill but said it was only a “half measure that is likely to lead to a doubling down on women who have not been using a prescription medication” — the majority arrested under the chemical endangerment statute.

“This is not going to solve the criminalization of pregnancy outcomes,” Diaz-Tello said.