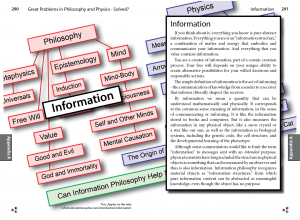 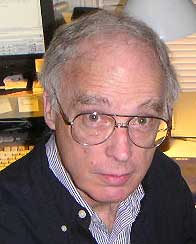 What is Information Philosophy?

The Information Philosopher has established that quantum mechanics and thermodynamics play a central role in the creation of all things. This finding has enormous implications for philosophy and metaphysics.

Instead of a closed universe that is winding down deterministically from an initial state of high information, we find the universe is open and increasing information indeterministically from an initial state of relatively high entropy and low information. Information is being continuously created in the universe, not least by human beings who are just learning that they are part of the cosmic creative process.

All three ideas depend on understanding modern physics, cosmology, biology, and neuroscience.

All three have strong connections to information science. They are contributions to a new information philosophy.

If these ideas are accepted, they could change some well-established philosophical positions. Even more important, they provide a new view of how humanity fits into the universe.
Information philosophy also proposes solutions for a number of philosophical and scientific puzzles, such as the problem of evil, the existential status of universals, and the paradox of Schrödinger’s Cat. It also throws considerable light on deriving ought from is, the problem of induction, the idea of progress, and the problem of quantum measurement.

Information philosophy offers a mind model that transcends flawed “brain as computer” models. The brain is not a digital electronic computer, though it has information circuits. It is not a Turing machine of deterministic states. The brain is not a mechanism in the seventeenth-century sense of a time-reversible system obeying Newtonian laws of physics. Time is of the essence in the mind. The arrow of time traces the irreversible development of unique biological individuals with increasing consciousness of self, others, and a nurturing environment.

Information philosophy sees the brain as a magnificent information processing and decision system. It is orders of magnitude more capable than the whole of today’s internetworked system of computers and multimedia communications channels – at accumulating actionable knowledge, which is the brain’s natural purpose, or telos.

Information philosophy identifies and establishes the existence of the Cosmic Good as constructed information structures. Kant’s search for a categorical imperative, for a universal duty, them becomes “Be good. Preserve the Good. Do good unto others. Life is Good.” The creative ergodic processes generate emergent phenomena that contain all we need to examine not only Kant’s God, Freedom, and Immortality, but also his Platonic dreams of Truth and Goodness, as well as the Enlightenment idea of Progress.

Evil is not merely the absence of Good, but the destruction of ergodic information structures, always fragile in the presence of entropic forces.

Information philosophy explains how humans are free to do good. Just as an individual character becomes good through good works (Karma in the Atman), the Sum of all human good works is seen as the manifestation of a “world soul” or matrix of information (Brahman) which can encode the immortality of each individual.

Information philosophy is a world-historical moment in Hegel’s sense of Absolute Spirit, a peak of the meditation in the Nietzsche/Heidegger metaphor, a process philosophy in the Whiteheadsense of a return to temporality, and a natural noosphere in Teilhard’s image, when the mind realizes and recognizes itself as part of the cosmic ergodic process of information accumulation, as co-creator of the universe.

Information philosophy is an attempt to examine some classic problems in philosophy from the standpoint of information.

What is information that merits its use as the foundation of a new philosophical method of inquiry?

Abstract information is neither matter nor energy, yet it needs matter for its concrete embodiment and energy for its communication. Information is immaterial.
It is the modern spirit, the ghost in the machine.

Immaterial information is perhaps as close as a physical or biological scientist can get to the idea of a soul or spirit that departs the body at death. When a living being dies, it is the maintenance of biological information that ceases. The matter remains and the information vanishes, unless it has been stored somewhere outside the body.

This purpose of living systems is to use their information to build themselves, to maintain themselves, and then to reproduce or replicate themselves. Living things store information (about their experiences, for example) in a memory of the past that they use to shape their future. Fundamental physical objects like atoms have no memory of such history.

And when human beings export some of their personal information to make it a part of human culture, that information moves closer to becoming immortal.

Human beings differ from other animals in their extraordinary ability to communicate information and store it in external artifacts. In the last decade the amount of external information per person may have grown to exceed an individual’s purely biological information.

Information is an excellent basis for philosophy, and for science as well, capable of answering questions about metaphysics (the ontology of things themselves), epistemology (the existential status of ideas and how we know them), idealism (pure information), the mind-body problem, the problem of free will, and the “hard” problem of consciousness.

What Can We Hope from Information Philosophy?

A philosophy that is based on quantifiable information promises to solve a number of interesting philosophical problems, and throw considerable light on other philosophical schools.

When we started seriously working on philosophy in the 1970’s, (the decade after we first saw the outlines of solutions to the problem of value and the problem of free will), we called our solutions Cogito and Ergo.

Actionable information has pragmatic value. Information philosophy can make a case that information (“negative entropy”) is a qualitative, quantitative, and objective good. We called our idea of an objective, human-independent good the Ergo.

Until the 1980’s, we called our philosophy “Ergodic Philosophy.” Now it is “Information Philosophy.”

Although information philosophy looks at the universe, life, and intelligence through the single lens of information, it is far from mechanical and reducible to deterministic physics. The growth of information over time is the essential reason why time matters and individuals are distinguishable. Increasing information explains all emergent phenomena, including many presumed “laws of nature.” “Determinism” is itself an emergent idea, an unjustifiable extrapolation from the apparent, but only “adequate,” determinism scientists saw in the Newtonian laws of motion.

In information philosophy, there is an arrow of time that is antithetical to some classical philosophical ideas like the “great chain of being” and timeless truths.

Information philosophy and other modern philosophies

For Plato the Forms or Ideas pre-exist any particular examples. Information philosophy explains Aristotle’s alternative view, that the general Idea is abstracted from common properties shared by a set of particulars. All such particulars come into existence as the universe evolves from a chaotic origin. Information philosophy shows how the information about an idea is embodied in minds and external artifacts. The Absolute Idea of Hegel is in human thoughts (Gedanken) about particular ideas first, but then postulated in an abstract Mind as a universal, where concepts (Begriffe) correspond to the things themselves by reason of their shared information content.

Information philosophy, like positivism, only admits knowledge that can be established scientifically, that is to say via hypotheses that can be tested empirically. But unlike positivism, information philosophy offers an epistemology and metaphysics of the “things themselves,” real entities in the external world for which we can access a subset of their intrinsic information. Our information is a “representation” of the external object, adequate for communications about the object between scientists and philosophers. An accurate information representation is one whose knowledge content is isomorphic to the essential information in the object itself.

Logical positivism is the vague idea that knowledge can be based on the logical combination of verifiable sentences (atomic facts). It collapsed under the unavoidable ambiguity of language. Language philosophy needs to be reexamined as an information philosophy. We communicate most of our everyday intellectual information with words. Information content can disambiguate words. Although the hope for an ideal language seems unrealizable, information philosophy promises a better mapping of the world of ideas onto the world of things.

The core idea of pragmatism is that knowledge is valuable if it can be acted on with successful consequences. Our beliefs (hypotheses) are constantly tested by the results of acting on them. Pragmatism is thus a natural scientific method used by individuals in their daily experiences. When a community of inquirers shares their information openly, the sum of their knowledge approaches the ideal of pragmatic truth. Like pragamatism, information philosophy finds value in information that is actionable.

Phenomenological intentionality is informational. Individual minds reflect on things and through intuition discover a meaning to their being. Epistemological and ontological questions are raised and pondered. Information philosophy shows us we can know the things themselves or answer questions of what it means to be a thing, because we are creating that meaning. Our creations are informational structures, which are adequate and actionable, testable and empirical, to the extent that they contain an accurate subset of the much greater information content of the “thing in itself.”

Existentialism says that before anything has an objective essence, it exists in the world. Information philosophy confirms this basic insight of the Existentialists. Things genuinely emerge in the universe. Humans define their own essences and bear full responsibility for creating values and purposes for their lives. Information philosophy confirms that humans are unpredictable and creative, and that they are free, but that, unlike the Existentialists, that human freedom is not absurd. There is objectifiable value in the universe.

Originally published by The Information Philosopher under a Creative Commons Attribution Unported 3.0 license.