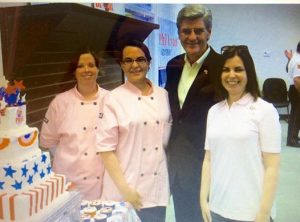 Mississippi Republicans should worry about the billions of federal dollars they are about to lose but they should also worry about the Christian bakers they have pissed off.

Just a few days ago, bakery owner Mitchell Moore blasted Republicans in his state for passing an anti-LGBT law that allows bigoted Christians to discriminate against employees and customers at will for any reason as long as they hide behind a so-called “sincerely held religious belief” to do so.

“The assumption that they think that they’re looking out for us – that’s not what they are doing,” Moore said during an interview about the new law, known as HB 1523. “We rank number one – our state government is the most dependent on federal money. We are the third most obese state. We rank at the bottom in unemployment, in education. We’ve got crumbling infrastructure. None of them are being tackled. Instead, we are passing, hey-let’s-discriminate bills.”

And now, a baker who made a cake for Governor Phil Bryant’s inauguration is humiliating him and his Republican allies for making it difficult to be proud of Mississippi.

“Look Governor Bryant, we will make cakes for anyone!” Biloxi Cake Artist Extraordinaire Jennifer Noble wrote on Facebook underneath an image of her posing with Bryant. “Including backwards thinking politicians that make it hard to be proud of being a Mississippian. We never wanted this. Quit using our industry as an excuse to deny the separation of church and state.”

She then announced that she had removed the picture she took with Bryant and said she regrets posing for the photo now and is embarrassed she ever posted the picture on her page.

So far, Noble’s Facebook post has drawn nothing but positive responses and applause while Governor Bryant is still getting hammered for signing the discriminatory bill into law.

And rightfully so. Bryant and his fellow Republicans should be ashamed of themselves for passing such a law and they should work to repeal it as soon as possible before Mississippi businesses decide that denying services to Republican lawmakers is their own “sincerely held religious belief.”