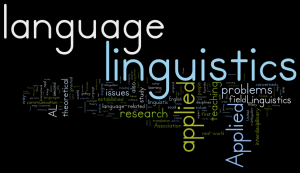 It’s hard to imagine that knowledge could be lost today. Technology seems to have put the ability to know almost everything within our grasp. So when researchers announced that they had “found” a previously unknown Peruvian language earlier this year, it was strangely tantalizing. Here was knowledge that we couldn’t Google. We could plumb the archives and look for clues that might offer answers, but true understanding would not be easily attainable. And in all likelihood, we would have to resign ourselves to not knowing. 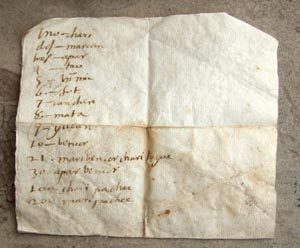 The back side of the Magdalena document shows translations for numbers from Spanish to a lost language. / Photo by Jeffrey Quilter.

In a public-friendly article, Jeffrey Quilter and colleagues (2010) announced in September that they had uncovered a remarkable find at an archaeological dig in Northern Peru: It wasn’t a funerary mask or ornate pottery or even a mummy, but a page. A letter actually, dating to 17th-century and detailing a minor trade event in the church complex where it was found. It is an interesting artifact by itself that could offer a glimpse into the life of the colonial community being uncovered. However, on the back of the letter someone had scribbled a number list in a previously unknown language, making the page more than just a record of church concerns. Though the list is short, it is enough to help researchers understand that they have in their hands the details of a number system that has not been previously recorded. As the researchers note, the history of the document itself—how and why it was created and then discarded—is tied to larger aspects of Peruvian history. And this history can help us understand the linguistic dynamics of cultural contact—which may be extended in some ways to the digital age.
Many People, Many Languages
The site of Santa Maria Magdalena de Cao is on the North Coast of Peru and provides a glimpse at life in a colonial town. Occupied from the late 16th- to the late 18th-century, the town was a redducion, a Spanish-style town where conquered populations were forced to live together under colonial rule. These towns naturally would have been sites of “mixing”: over time, the meeting of different cultural and linguistic backgrounds would have yielded to new forms of cultural identity with a tendency toward that of the conqueror.
It is perhaps wise to pause here for a moment and note that some form of this sort of “mixing” had been going on well before the Spanish arrived as a colonial presence in South America, particularly at the hands of the Inka (Inca):

A highly complex linguistic and cultural landscape that had been created through millennia of human interactions was still present in the mid-16th-century era of the Spanish intrusion. The palimpsest of societies and tongues owing to historical processes of the rise and fall of empires and movements of people was augmented by a variety of specific cultural practices as well, such as the placing of colonies forcibly, as under Inka imperial policy (Quilter et. al. 2010: 361).

Indeed, there may have been many indigenous languages in Peru in prehistory that may have been absorbed after Inkan conquests. For example, between 100 and 800 CE, the North Coast of Peru was home to a culture known as the Moche or Mochica. Given the breadth of the region it is likely more than one language was spoken, but this is not definitively known. The archaeological record tells us that Northern and Southern regions of the Moche subsequently developed into the Lambayeque and Chimu respectively, and the Chimu appears to have conquered or absorbed the former, and gone on to become a rival to the Inka empire. However, contact with the Inka left traces on the Chimu society:

There is substantial evidence to suggest that the Inka actively worked to co-opt or coerce local elites into Inka cultural practices as a means of political control, and it is well known that they also brought the sons of local leaders to Cuzco for training in such practices (Quilter et. al. 2010: 361).

For this coercion to be effective, a common language would be of immense importance. To this end, the Inka helped spread the Quechua language family, a dialect that is widely used throughout the Andes, though they themselves may have spoken another language. The use of Cuzco Quechua would have helped solidify the goals of empire.
Learning to Count
Similar linguistic practices were employed by colonial powers via the Catholic Church to establish the state’s authority. In fact, the Spanish helped spread some version of Quechua themselves to teach the Gospel, and consequently impose Spanish law and order on the local people. Church records suggest that there were at least two but possibly three distinct languages spoken on the North Coast: Quingnam, the language of the Chimu monarchs, Mochica, a dialect spoken along the coast, and Pescadora, the language of the North Coast fisherfolk. It is likely that the fisherfolk spoke a distinct language in keeping with the socioeconomic organization in the region. Within these three languages, there would have been numerous dialects, so it is no surprise that the Church would have worked to reduce the number of languages that they would have had to work with.
The document suggests an attempt to learn the number system of a regional dialect. The author wrote out the Spanish names for the numbers 1 – 3, and the Arabic numerals for 4 – 10, 21, 30, 100 and 200, giving us the following:
It clearly lays out the system’s combinatory rules, and suggests that by learning this sequence, the rest of the sequence could be filled in. Interestingly, pachac appears to have been borrowed from Quechuan, but the list does not yield any other real linguistic clues about origins. The other numbers are unique and distinct, and numbers themselves function as narrow, repetitive systems within languages.
But we know enough to know what it is not. That is to say, Mochica survived into the 19th-century, and we have word lists that reveal no similarities to the found list of numerals. Records remain also from the Inka, allowing for comparisons and showing no similarities. No trace of the Quingnan and Pecadora languages remain, so they cannot be definitively ruled out. But the one potential connection to Quechuan suggests some point of contact with the larger language family.
There is a possibility that the numbers may be part of a trader’s language within Pescadora. Missionary records make reference to two Pescadora languages, with the possibility of one being a pidgin: a simplified trade language modeled after higher-status language(s), with shared grammatical and semantic features taken from the borrower’s native tongue (365). Pidgins are common in communities with high mobility that are engaged in trade because they help with communication between the two groups and facilitate commerce. The letter on which the numbers were scribbled reference a commercial transaction, perhaps the number system was a note for a potential transaction of its own. But without additional information, this is pure speculation—fun to imagine, but speculation nonetheless.
Language Lost Today?
Lost languages are not a think of the past. Globalization continues to absorb languages today, so much so that UNESCO has launched an initiative to help preserve languages in danger of extinction [pdf]. In a program document dating to 2003, UNESCO states:

Even languages with many thousands of speakers are no longer being acquired by children; at least 50% of the world’s more than six thousand languages are losing speakers. We estimate that, in most world regions, about 90% of the languages may be replaced by dominant languages by the end of the 21st century.

Languages may be replaced as a result of military, economic, religious, cultural, or educational efforts. And immigration itself can play a role in the continued existence of a language. An April article from the NYT reports that New York City is home to about 800 languages, such as Garifuna (an Arawakan language that originated with descendants of African slaves shipwrecked near St. Vincent) and Mamaju (Austronesian language), which largely belong to immigrant groups. Immigrants often see language as a way to remain connected to a heritage left behind, to retain and transmit a cultural identity in a new land.
Digital sociality is also helping to create an entire category of “lost” that covers our modes of communication. With the growth of Internet slang and emoticons, which are now widely used in almost all modes of digital communication, language is shifting and changing, and shared elements are arising. Emoticons themselves have a universal element to them—Western and Japanese “happy” emoticons have similarities that make their meaning quite clear. By using these sorts of online symbols we are actively creating a dialect for the digital space.
Not that differing languages are necessarily a barrier to online communication anyway, at least not with Google Translate at hand. Even so, the program only covers 59 languages to-date, including English. Smaller languages, such as Garifuna and Mamaju, already at a loss for speakers, are not represented in linguistic access to the web. However, technology does allow for the preservation of some of these smaller dialects, which are in danger of extinction. The Endangered Language Alliance is working to record as many dying languages spoken by New York City residents as quickly as possible. This audible record can help future researchers—and possibly subsequent generations of former speakers—recreate lost languages.
This lone page demonstrates how much information remains just outside of our reach. While today, “standard” language families will likely be preserved for posterity, there is a great deal of work to be done if the languages of socially peripheral groups are to be recorded. Interestingly, Quilter and colleagues end their article with a note on the need for interdisciplinary work within anthropology to fully appreciate the importance of the discovered page. Given the recent debates concerning the field, it certainly bears repeating as a reminder of how much our understanding is enhanced through cooperative collaboration.
Cited
Quilter, J., Zender, M., Spalding, K., Jordán, R., Mora, C., & Murga, J. (2010). RESEARCH ARTICLES: Traces of a Lost Language and Number System Discovered on the North Coast of Peru American Anthropologist, 112 (3), 357-369 DOI: 10.1111/j.1548-1433.2010.01245.x