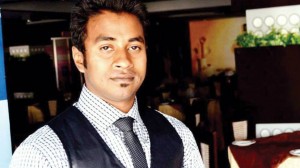 Nazimuddin Samad, an atheist in Bangladesh who has spoken out online on Facebook and other social media, has been butchered to death by radical Islamists as he walked home with friends.  Samad was a masters student of Jagannath University, where he was just prior to the fatal assault as the attackers screamed “Allahu Akbar” according to witnesses.

According the Dhaka Tribune:

Police said that the killers who came on a motorcycle first intercepted them and then attacked Nazim with machetes. At one point, he fell on the street and then the attackers shot him to confirm death before leaving the place. His brain spilled over the road in the attack.

“It is both heartbreaking and maddening to think that this bright and passionate young student, with his whole life ahead of him, was so brutally and callously murdered, almost certainly by Islamic extremists, all because he spoke out for secularism and reason. All of us at the Center for Inquiry extend our deepest condolences to his friends and family,” said Michael De Dora, CFI’s director of public policy and main representative to the United Nations.

Samad had been organizing campaigns for secularism on Facebook, and a day before the murder, Samad posted about his concerns over the “deterioration of law and order” in the country, calling it a “public disgrace.”

“The government of Bangladesh must do much more to protect its own people from marauding Islamist killers,” said De Dora. “These murders keep happening because they are allowed to happen, leaving writers and activists like Samad, Avijit, and the other victims as the only ones willing to stand up to those fomenting this violence. The Bangladesh government must publicly and forcefully defend the universal human rights to freedom of religion, belief, and expression, fully investigate and prosecute these crimes, and show that attacks on individuals based on their beliefs or expressions will not be tolerated.”

How long until the world takes notice of the literal persecution and murder of atheists in many countries, and how long until nations begin to sanction others that adopt laws not only legalizing it but overlooking in many cases human rights violations up to and including murder?

Freedom of speech, whether provided by various nations or not, is a human right worth fighting for and demanding for everyone, no matter how offensive the speech.

If we cannot speak our minds without fear of retribution from those who disagree, we will continue to live in a world where people like Samad express discontent with religious belief at great cost.