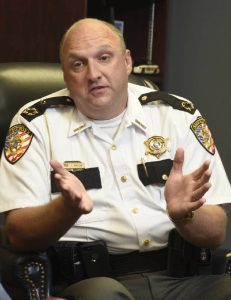 Sheriff Eric Watson’s use of the department’s official social media pages to promote his religion and censor dissenting opinions is at the core of this lawsuit.

American Atheists along with a resident of Bradley County, Tennessee filed suit in federal district court in Eastern Tennessee today against Bradley County Sheriff Eric Watson for violations of the First Amendment. The purpose of the suit is to stop the sheriff’s policy of censoring comments that are negative or at odds with his personal beliefs and to restore residents’ access to comment on the sheriff office’s Facebook page. The resident is using the alias Jane Doe because of fear of retaliation.

On April 5, American Atheists sent a second letter to Sheriff Watson informing him of the complaints and requesting records about the BCSO’s social media policy.

The department has continued its policy of deleting comments beyond those that are obscene or pose a threat to public safety. The sheriff has also continued to block past visitors from commenting on the BCSO’s Facebook page.

“This lawsuit is about protecting the community’s First Amendment right to speak out about its elected officials,” said American Atheists’ National Legal Director, Amanda Knief. “The BCSO had no problem with public comments until they were critical of the sheriff or of his proselytizing at work. But the government doesn’t get to silence speech it doesn’t like—even if that speech is negative, unflattering, and disrespectful of the sheriff’s religion.”

American Atheists and Jane Doe are seeking a permanent restraining order preventing censorship of social media comments and preventing the use of government social media for the sheriff to proselytize.