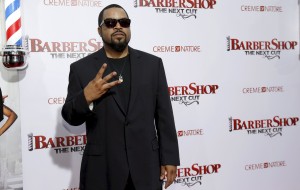 Cast member Ice Cube poses at the premiere of “Barbershop: The Next Cut” at TCL Chinese theatre in Hollywood, California April 6, 2016. REUTERS/Mario Anzuoni

LOS ANGELES – The “Barbershop” franchise is back, with the third instalment tackling the issue of gangs and gun crime but with much of the same cast and comedy as before.

The film, which co-stars Eve, Anthony Anderson and Nicki Minaj, sees the staff of the now-unisex salon organize their workplace as a safe haven for local people to sort out their issues, and soon their idea begins to make a difference.

“We’re hoping that the youth look at this movie and at a young age make the right decisions … We think the movie has the power to do that and that’s why we did it.”

Cedric the Entertainer returns as elderly joker Eddie and at Wednesday’s premiere spoke about the importance of comedy.

“If you had the opportunity to say something funny whilst saying something important, people will then hear the message without feeling like you’re preaching to them, like you’re stomping it to them and I think that’s what this movie does,” he said.

“Barbershop: The Next Cut” goes on release from April 15.