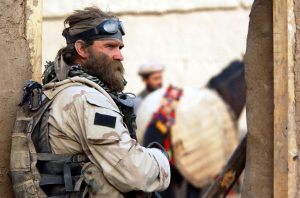 Mercenaries have gone corporate. The United Nations Mercenary Convention, signed in 2001, defines and places limits on what constitutes mercenaries. Although there are notable holdouts, the position of the UN is that mercenarism is against international humanitarian law. But this hardly seems to matter because, by exploiting loopholes in international law along with some creative “lawyering,” the modern mercenary now operates with impunity. With enough paperwork cloaking them, private military and security companies work in the shady cracks of the justice system, where they flaunt their mercenary role with no fear of punishment. No matter what they now call themselves, they are soldiers of fortune. 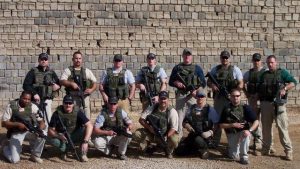 The public remains largely unaware that these so-called “security companies” now quietly operate around the world. G4S, for example, is the third largest private employer on Earth, yet most people have never heard of it. Companies like these often provide straightforward services such as prison or event security. But increasingly, the line between security and quasi-military operations has been blurred as corporations take on ever more military-capable assignments. Companies in this line of work staff themselves with ex-Special Forces, presumably for their skills in combat.

Now, those same firms are lobbying to privatize war. Many recall Blackwater, a company that became notorious in the Iraq War when its “employees” murdered 17 Iraqi civilians. After re-branding Blackwater as Xe, then selling it in order to escape its universally bad reputation, company founder Erik Prince went on to create Academi (Blackwater 3.0). Prince, who is the brother of U.S. Education Secretary Betsy DeVos, then had the audacity to propose that America’s ongoing war in Afghanistan be outsourced to private companies. In a shameless act of self promotion, Prince wrote opinion pieces published last year in Wall Street Journal and the New York Times, paining a romantic portrait of the history of mercenary forces while advocating the private outsourcing of the Afghanistan war in the style of the Dutch East Indian Trading Company. 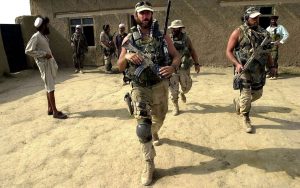 That wasn’t all. The new site Buzzfeed obtained a private pitch deck in which Prince detailed how the Afghanistan war of his fantasies would be funded — with potential profits from war in the Helmand province alone reaching more than $1 trillion. Prince, of course, has faced no real consequences for the documented atrocities that were committed by his former firm, Blackwater. If anything, his power and influence have grown as he continues to amass enormous profits from a shadowy security contracting industry.

The U.S. remains one of the notable holdouts of the 2001 UN treaty — known in full as the International Convention against the Recruitment, Use, Financing and Training of Mercenaries — and it is unlikely we will ever join. The wars in Afghanistan and Iraq increasingly relied on private contractors, Blackwater being only the most infamous. During both wars, in fact, private contractors frequently constituted a majority of forces serving, according to the Congressional Research Service. Although the majority of contractors served in non-combat roles, like construction or intelligence analysis, they increasingly acted in combat and security roles.

Mercenaries’ hazy legal definition is extremely useful to the U.S., for one because it enables the Pentagon not to count what are effectively additional “boots on the ground” in its tallies of fighters, casualties and deaths. As both wars dragged on, and America’s political will faltered, Washington’s increased reliance on security contractors actually caused contractor casualties to exceed official soldier casualties in 2009 and 2010. To this day, mercenary contractors constitute a significant proportion of combat deaths, although they aren’t officially “counted” as such.

Now, under the Trump administration, observers expect things to get worse. Academi and Erik Prince have cozy business ties to the administration. Prince was even caught up in the investigation examining Trump’s ties to Russian interests: In a secret meeting brokered by the United Arab Emirates in the Seychelles on January 11, 2017, Prince and Kirill Dmitriev, chief executive of the state-run Russian Direct Investment Fund, allegedly discussed plans to create a secret back channel to communicate with Russia.

The UAE has a longstanding relationship with Prince and Academi. Some suspect the country intends to increase its use of mercenary forces to exert power in the region. Qatar’s ex-Deputy Prime Minister Al-Attiyah told Spain’s ABC newspaper that plans were in the works to make Academi part of military training and combat operations in the region, although the plans were ultimately not executed.

What does all this mean? For starters, any military action taken by President Trump will more than likely include a large number of private contractors, and therefore will be in the financial interests of Prince and others in his profession. That private companies can wield so much power is a frightening prospect in an age when oligarchs and oligarchs — from Trump to Putin, Erdogan to Duterte — are boldly testing their megalomaniacal strength. These mercenary corporations, with their hefty military expertise in the form of ex-Navy SEAL and Delta Force founders, are in essence staffing parallel special forces operations and renting them out for profit. The only barrier these days to having your own private army of Navy SEALS, it seams, is having enough cash to employ them.

There is a reason why the United Nations stands firmly against the use of mercenary fighters: because mercenaries, at the end of the day, have performed far more atrocities than acts of valor on the battlefield. Prince and Blackwater are the clearest evidence of that. The fact is, if the Unites States cannot justify to the public why it is fighting a war and losing soldiers’ lives, it shouldn’t be allowed to hire mercenaries to conduct the ground operations of that war. Sadly, war is good business and the private security industry just had its biggest year yet, growing to a total size of $180 billion in 2017. If and when Donald Trump decides to start or enter the U.S. into a war, expect those profits to soar even higher.

Originally published by NationOfChange, free to the public.