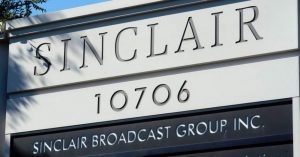 “I’ve never seen anything like this,” said one critic. “They certainly have the right to do it, but it’s blatantly unethical.”

Sinclair Broadcasting Group, the nation’s largest television company with 173 stations nationwide, is raising concerns among ethics experts and journalists for its decision to solicit contributions for its political action committee from some of the company’s employees.

In a Jan. 31 letter to newsroom directors from David Amy, the broadcaster’s vice chairman and head of the Sinclair Political Action Committee, the company—known for its right-wing slant and fighting federal regulations to acquire 42 more stations from Tribune Media—urged its employees to “please take the time to evaluate the importance that the Sinclair PAC can have towards benefitting our company and the needs of the industry as a whole.”

While a screenshot of the letter was posted to a television blog earlier this month, one of Sinclair’s senior vice presidents confirmed its veracity to the Washington Post on Saturday, emphasizing that it was sent to news directors—”as a result of being part of our managerial level, not because of their role in editorial”—but not to reporters, anchors, or other lower-level employees.

Lewis Friedland, a journalism professor at the University of Wisconsin and a former TV news producer, told the Post that Sinclair’s move “violates every standard of conduct that has existed in newsroom for the past 40 or 50 years.”

“I’ve never seen anything like this,” Friedland added. “They certainly have the right to do it, but it’s blatantly unethical.”

“In addition to breaking with journalistic tradition, the company’s request could put its news directors in an untenable position,” the Post notes. “Some news directors might feel that opting out would be perceived by their superiors as an act of disloyalty.”

Several journalists turned to Twitter to denounce the company’s decision:

In ethically questionable move, conservative Sinclair Broadcast Group solicits its news directors for its political fundraising efforts (it owns Milwaukee’s Channels 18 and 24 and is seeking to buy Channel 6 as well): @washingtonpost. https://t.co/SmVL7cjAPu

Conservative-run Sinclair Broadcasting, owner of more local news stations than any other company in America (including key battleground states), is now requesting its News Directors contribute to its conservative PAC. The conservative bias in legitimate media is growing.

Sinclair’s letter to its news directors praises Federal Communications Commission (FCC) Chairman Ajit Pai, a Trump-appointee who has come under fire for his ties to the company and his advocacy for an agenda that consumer advocates and free press groups have criticized as a “virtual death sentence for local media” so Pai can give “massive handout[s] to his friends and political allies at Sinclair.”

The letter states, “Since the change in administration last year, we now have an FCC Chairman who appreciates the important role of local broadcasting enough to launch a number of politically unpopular deregulatory initiatives necessary to ensure the future of our industry,” decrying congressional attempts to counter the agency’s moves to deregulate the news media industry.

“We anticipate other efforts to undermine the FCC’s deregulatory agenda,” the letter continues. “Corporate contributions to federal candidates are prohibited by law, but our PAC is a legally acceptable way for eligible Sinclair employeees to make our collective voice heard…. The maximum contribution from each employee in any year is $5,000.”