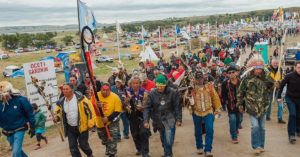 The Army Corps of Engineers, on orders from President Obama, has issued directives that Dakota Access Pipeline construction be halted based on its current easement projection.  DAPL will not be allowed to run the pipeline through the Missouri River as planned.

As protesters celebrate the victory, law enforcement has begun a withdrawal from the bridge and near-camp areas.  Morton County Sheriff Kyle Kirchmeier said that no action will be taken against protesters as long as they do not interfere with the withdrawal.

This announcement comes just one day after approximately 2,500 veterans joined Standing Rock to serve as shields equipped with protective gear and all-terrain vehicles.

DAPL, following this permit denial, will have to either find a new route for the pipeline, go to court, or wait until President-Elect Trump takes office to see if he will rescind President Obama’s order and re-issue permits.