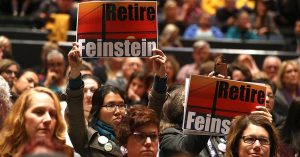 “The days of Democrats biding our time, biting our tongue, and triangulating at the margins are over,” said state Senate President Pro Tem Kevin de León.

California Democrats shocked Senator Dianne Feinstein by not endorsing her for re-election at their state convention Sunday.

“The outcome of today’s endorsement vote is an astounding rejection of politics as usual, and it boosts our campaign’s momentum as we all stand shoulder to shoulder against a complacent status quo,” de León said Sunday. “California Democrats are hungry for new leadership that will fight for California values from the front lines, not equivocate on the sidelines.”

“The days of Democrats biding our time, biting our tongue, and triangulating at the margins are over,” he said.

“California Democrats are hungry for new leadership that will fight for California values from the front lines, not equivocate on the sidelines,” de León said. “We all deserve a leader who will take our climate action to Washington, and will fight each and every day to protect our human and civil rights, our immigrant families and Dreamers, champion universal health care and create good paying middle class jobs.”

Dianne Feinstein, 84, has spent her 4 full terms in the US Senate with great loyalty & servitude to the CIA & NSA & various wars. She now wants her 5th full term. But the California Dem Party just refused to endorse her; they prefer her opponent by 54-37% https://t.co/IwE9o0cqC0

It was a jolting signal to the 84-year-old Feinstein, who has been in politics for five decades and was first elected to the Senate in 1992.

“It sends a message that the Democratic Party is a progressive party and they’re going for the candidate who they view is the more progressive candidate,” said Tom Steyer, the billionaire San Francisco activist who is close to de León but has not endorsed in the race. “Both of them have long histories of service to the state, to the country and to the party. And it’s pretty clear that Kevin is positioned as more progressive than Sen. Feinstein.”