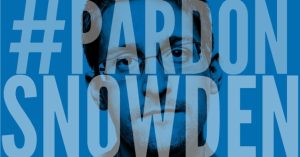 Shocked by the “towering cowardice” of the Washington Post‘s Sunday editorial calling for Edward Snowden to be prosecuted, journalist Glenn Greenwald led the charge against the prominent newspaper for achieving what he described as an “ignoble feat” in American history: being “the first-ever paper to explicitly editorialize for the criminal prosecution of its own paper’s source – one on whose back the paper won and eagerly accepted a Pulitzer Prize for Public Service.”

Published just two days after Oliver Stone’s biopic on the NSA whistleblower, ‘Snowden,’ premiered in U.S. theaters and following the launch of a national campaign by human rights groups and privacy advocates calling for him to be pardoned, the timing of the WaPo editorial—simply titled “No pardon for Edward Snowden“—emerged as an unexpected (and unwelcome) salvo from a paper whose news editors and journalists played a central and early role in reporting on the information provided.

Greenwald, who along with the Washington Post’s Barton Gellman and filmmaker Laura Poitras, was among the first journalists to engage with Snowden and report on key NSA mass spying programs previously kept secret from the U.S. and global public, responded to the editorial in scathing fashion. According to Greenwald:

what makes today’s Washington Post editorial so remarkable, such a tour de force, is that the editors are literally calling for the criminal prosecution of one of the most important sources in their own newspaper’s history. Having basked in the glory of awards and accolades, and benefitted from untold millions of clicks, the editorial page editors of the Post now want to see the source who enabled all of that be put in an American cage and branded a felon. That is warped beyond anything that can be described.

On Twitter, Snowden chimed in on his own behalf:

To defend NSA from critics, @WashingtonPost attacks the story they broke. Which won the Pulitzer for Public Service. https://t.co/S4T2Aj0mEv

Last week, various groups launched the #PardonSnowden campaign which include a petition for people who want to add their support for the call.

“Snowden’s actions, and the Pulitzer Prize-winning reporting that followed,” the petition reads, “set in motion the most important debate about government surveillance in decades, and brought about reforms that continue to benefit our security and democracy.”

That argument, however, appears inadequate for the Washington Post editorial board, which argued  that Snowden’s “revelations about the agency’s international operations disrupted lawful intelligence-gathering, causing possibly ‘tremendous damage’ to national security, according to a unanimous, bipartisan report by the House Permanent Select Committee on Intelligence. What higher cause did that serve?”

In addition to Greenwald’s detailed take-down of the Post‘s argument, critics of the newspaper were unsparing on social media:

Why should a source leak to the WaPo if its edit board will call for imprisonment?https://t.co/VsqL4teLix

@RayJoha2 Was that also WAPO’s thinking when it published leaked material from Snowden and made money from those stories?

Would love to be a fly on the wall when @PostBaron and @bartongellman discuss this inept attack on their work. https://t.co/6w73wicaWt

oh, wapo, you brood of mf jackals, you https://t.co/C5qEp9KVWT

.@washingtonpost makes history: 1st paper to call for prosecution of its own source- after accepting Pulitzer https://t.co/wOkGkae7RW

the WaPo now wants their source (Snowden) to be jailed? This is so FUBAR. #NeverHillaryOrTrump https://t.co/5qQi0G2nFK