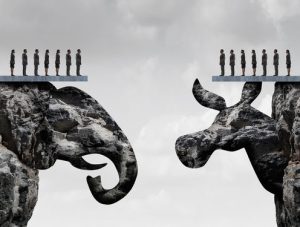 The nation’s political chasm – already wide – has grown even more since 2012. ‘Partisanship’ via Shutterstock

Elected officials and the media are in cahoots. Both have succumbed to a two-party system that treats voters not as independent thinkers, but as blind partisans.

You’ve probably heard the popular aphorism “to the victor belongs the spoils of the enemy.”

But you might not know who first said it.

In 1832, the Senate debated President Andrew Jackson’s unpopular – and decidedly partisan – recess appointment of Martin Van Buren as minister to Great Britain. New York Senator William L. Marcy, a staunch ally of the president, defended the move with those words.

Essentially, Marcy was justifying Van Buren’s appointment on the grounds that since Jackson had won the presidency, he could do whatever he wanted.

Marcy’s loyalty to Jackson and Van Buren helped Marcy to reap some rewards of his own: He would go on to become governor of New York and was eventually appointed secretary of war and secretary of state by Democratic Presidents James Polk and Franklin Pierce. He was even featured on the US$1,000 bill.

But Marcy’s aphorism also signified the growing partisanship taking place in 19th-century American political life, a divide that continues to frame how we think about politics today.

The rise of the two-party system

A recent Pew Research Center report found that the average Republican is more conservative than 93 percent of Democrats and the average Democrat is more liberal than 94 percent of Republicans. Pew has also noted that the country has moved away from the center over the past 20 years: Democrats have shifted to the left by 30 percent and Republicans have shifted to the right by 23 percent, leaving little common ground between the two parties.

This Pew graphic shows how the center has dropped out of American politics over the past 20 years.

Political philosophers like Louis Althusser offer an explanation for this growing divide. According to Althusser, states – including democratic republics – will eventually position citizens as “always already subjects”: fractured, obedient and positioned by ideology to work against their own best interests.

In the United States, this may be what’s going on today. But it wasn’t always this way.

Ought not the people therefore to watch? to observe facts? to search into causes? to investigate designs? And have they not a right of JUDGING from the evidence before them, on no slighter points than their liberty and happiness?

In the most ideal sense of the word, being a citizen meant combating corruption by squirreling out facts, investigating the motives of political figures and judging the actions of government through the lens of one’s own liberty and happiness.

The idea is to be independent, critical thinkers – not loyal and obedient subjects.

It wasn’t much different from being a subject, and advocates of this system demanded loyalty to the party above all else.

“We hold it a principle,” the Jacksonian newspaper the Albany Argus declared on February 17, 1824, “that every man should sacrifice his own private opinions and feelings to the good of his party and the man who will not do it is unworthy to be supported by a party, for any post of honor or profit.”

With the party system firmly established, it was difficult for any nonpartisan to win elected office. Voters and candidates would pick sides, taking for granted that a victory for the candidates of their party would protect their liberty and happiness.

Early American newspapers served primarily to facilitate trade and commerce, being largely notices of goods for sale. In the 19th century, newspapers began to function as mouthpieces for political parties. But by the turn of the 20th century, many newspapers switched their tack. Journalism adopted the “norm of objectivity,” using muckraking and investigative reporting to hold those in power accountable.

Unfortunately, today, while the public still wants the media to act as a watchdog, in many ways (but not all) outlets have reverted to promoting partisanship.

The media, after all, is business – and many outlets have become increasingly partisan because they’ve realized that it’s good for the bottom line.

And it’s not just news outlets that understand this, but news aggregators. For example, 66 percent of Facebook users get the news primarily from their Facebook news feed. We know that the Facebook algorithm skews what we see in order to keep us on the site longer.

So what impact does the algorithm have on the news we see in our feed?

For example, on the day after Melania Trump’s controversial Republican National Convention speech, users whom the algorithm identified as liberal were “fed” an article calling Trump’s response to the plagiarism allegations “pathetic.” Meanwhile, conservatives received an article from Rush Limbaugh with the headline “Liberals Always Attack GOP Wives.” 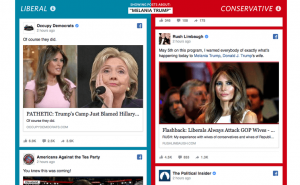 A “threat to the nation” is a far cry from simple disagreement. After all, who threatens the nation?

Let’s return to Marcy’s aphorism and think about how it positions us in relation to political parties.

To the victor belongs the spoils of the enemy.

What does it do to us, to our politics, when we think of the people who hold different policy views as “enemies”? Enemies are evil, not merely people with good reasons for thinking differently. Enemies cannot be trusted. Enemies are irrational because if they were rational, then they would think like we do. We can’t negotiate with evil, untrustworthy, irrational enemies – and so we don’t.

Being a staunch partisan might get you on the $1,000 bill. But a system of ‘winners’ and ‘losers’ is bad for democracy. Wikimedia Commons

Ultimately, Marcy’s “to the victor belongs the spoils of the enemy” assumes, first and foremost, that we’re partisans, not citizens.

So who profits from voters who act like partisans instead of citizens?

Meanwhile, the rest of us lose.

Perhaps instead of “to the victor belongs the spoils of the enemy,” we could learn to think of politics as “to those entrusted with great responsibility belongs the obligation to work for the common good.” It isn’t as poetic, but it also isn’t as partisan.

As the political party spectacle of two back-to-back presidential nominating conventions plays out, think about how each party invites us to act. Is it as a loyal, obedient soldier or an independent thinker?

Is it as a partisan subject, or as a citizen?