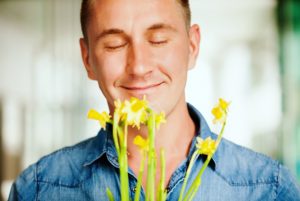 The smell of daffodils is a treat for most people, but some cannot experience the joy because they have lost their sense of smell. Mila Supinskaya Glashchenko/Shutterstock.com

By Dr. Steven D. Munger / 08.24.2017
Director, Center for Smell and Taste
Professor of Pharmacology and Therapeutics
University of Florida

Each of our senses gives us a unique view of our world. Our visual system detects parts of the electromagnetic spectrum, revealing movement, brightness and color, but also a smile or a tear. Our auditory system registers changes in pressure, but also allows us to hear the crash of ocean waves or the smoky contralto of Billie Holiday. To appreciate the flavor of food and drink, recognize the perfume of the first spring flowers or detect the danger of a gas leak, we rely upon our olfactory (smell) and gustatory (taste) systems.

Smell and taste are intimately linked to each other. They are collectively known as chemical senses because each system functions to detect chemicals in our external environment. Our brains also process aspects of smell and taste together, especially when it comes to perceiving the flavor of food.

The chemical senses play hugely important roles in the lives of all animals. For example, a recent pair of studies showed that social order breaks down dramatically in ants with a disrupted olfactory system. These animals, which rely on odors to communicate with each other the way humans rely on language, could no longer perceive important social messages sent between individuals.

Anosmia, which is the complete loss of smell, and other smell or taste disorders can be life-changing for humans, too. Because your brain combines smell and taste to create a perception of flavor, impairments in either of these senses can make food seem bland or even unpalatable. And while we don’t rely on odors to communicate the way ants do, those who can’t smell their new baby, their partner or the freshly mown grass can feel isolated from others and from the world around them.

Unfortunately, there are no effective treatments for most patients with smell and taste disorders. Additionally, patients often find it nearly impossible to be properly diagnosed or to receive support that can help to improve their quality of life – critical needs that we are helping to address in the laboratory and the clinic at the University of Florida Center for Smell and Taste.

Humans can track scent on the ground the way dogs do.

The human sense of smell is better than you were told. In fact, it rivals that of other animals. Humans can even follow a scent track on the ground. 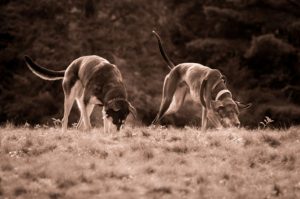 Dogs in a field chase a scent. CG3/Shutterstock.com

However, dogs, rodents and many other mammals are attuned to parts of the chemical world of which we are unaware: They can detect specialized odors such as pheromones that may influence social interactions, mating behaviors or aggression responses. There is little evidence supporting a role for pheromones in humans, no matter what those internet ads might say!

Some people smell odors that aren’t there.

People with phantosmia perceive an odor even when there is not one present. These smell phantoms (there are taste phantoms, too) can have many causes, including nasal infections, neurological damage accompanying surgery or conditions such as epilepsy. Phantosmia is but one type of smell and taste disorder, the most common of which are hyposmia, which is diminished ability to smell, and anosmia, which is the inability to detect smells.

Sweet taste can be an illusion.

Artichokes contain chemicals that don’t taste sweet on their own, but leave behind sweetness when washed away by a drink of water. These chemicals act by locking the sweet taste receptor in your mouth into the “off” position; when the chemical is washed away, the receptors all snap to the “on” position simultaneously, evoking a sweet “water taste” even in the absence of sugar or other sweeteners. The sweet taste inhibitor lactisole – a compound added to jams and jellies to dampen the intense sweetness from high concentrations of sugar used as a preservative – can elicit a similar perception.

Mosquitoes (and other insects) have noses.

But they do have have antennae and other structures that function much like the human nose to detect odors. And they use their sense of smell to find you when they want a meal. The insect repellent DEET works in part by disrupting the mosquito’s sense of smell.

An unusual protein called miraculin, found in the “miracle fruit” of the tropical plant Synsepalum dulcificum, doesn’t taste sweet on its own but becomes a potent sweetener when exposed to acids. Suck on a lemon after eating a miracle fruit, and it will taste like lemon candy. 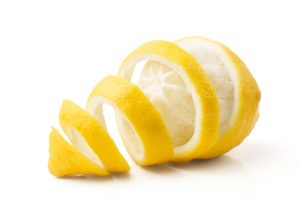 A lemon will taste like candy after you eat miracle fruit. grey_and/Shutterstock.com

Smell and taste aren’t the only chemical senses.

While you can tell the difference between basil and garlic by their smell, your sense of taste is largely indifferent to herbs and spices. Then how do you sense of cooling of the menthol in mint, the heat of capsaicin in a habanero, or the tingling of sanshools in Szechuan peppercorns? Compounds in many herbs and spices trick temperature, pain and vibration sensors associated with the trigeminal nerve in the mouth and nose to give you these sensations. This third chemical sense is known as chemesthesis.

A mirror won’t alter a smell. But some mirror image molecules (known as stereoisomers – think of comparing your right and left hands) have very different smells. The best-known stereoisomers that evoke very different aromas are D-carvone and L-carvone, which smell like caraway and spearmint, respectively.

Few people may appreciate the biology and chemistry that allows us to experience our chemical world. But those of us who study the chemical senses hope that our research will lead to tastier and healthier food, reduce the spread of insect-borne disease, improve the lives of people with smell or taste disorders and create a better understanding of the importance of smell and taste.