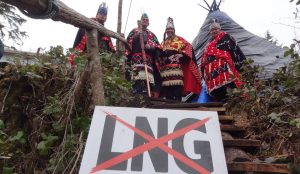 Indigenous leaders gather on Lelu island where the Lax Kw’alaams First Nation has set up camp to protest the construction of the Petronas LNG terminal. | SkeenaWatershed Coalition

A vigorous debate is underway over what exactly Canada’s federal government means by its various statements and election promises regarding approval of natural resource projects – in particular whether indigenous peoples have the right to stop construction of pipelines and related infrastructure on their traditional territories. This debate shows that while progress has been made towards overcoming the legacy of colonial genocide in Canada, structural racism remains embedded in the country’s fabric.

Leading up to and during the 2015 federal election, Liberal leader Justin Trudeau struck a very different tone. Unlike the Conservatives, he promised that a Liberal government would develop a new nation-to-nation relationship with indigenous peoples, based on mutual respect, full recognition of the International Declaration of the Rights of Indigenous Peoples (which the Conservatives had considered as only an “aspirational” document), and fulfillment of the Truth and Reconciliation Commission’s 93 recommendations.

On the specific issue of resource projects and pipelines, the Liberal platform referred to “community consent” as necessary for final approval. This concept was widely welcomed in areas such as British Columbia’s Lower Mainland, where a solid majority of the population opposes Kinder Morgan’s application to expand its oil pipelines from Alberta to Burnaby on the west coast.

These pledges helped the Liberals win a big majority in Parliament. Voter turnout was way up on First Nations reserves and in urban areas like Metro Vancouver, where many people counted on a new political approach. Hopes were raised by the new federal government’s initial steps, such as the long-awaited inquiry into murdered and missing indigenous women and girls, and the appointment of First Nations activist Jody Wilson-Raybould to the federal cabinet as Justice Minister.

But as many predicted, the Liberal government’s stance has shifted under pressure from the resource industry. Even as he pledges further consultation with aboriginal peoples and environmentalists, Prime Minister Trudeau also says that “unanimous consent” is not needed for the government to approve pipeline projects, and that no community has a veto.

This would appear to contradict the 2014 Supreme Court decision in the Tsilhqot’in v. BC case, which had wide implications for the rights of indigenous peoples, particularly in British Columbia, where many never signed treaties or surrendered their traditional territories. That ruling clearly found that in cases where aboriginal title is proven, consent is required before major projects can go ahead.

This court ruling is in accord with the content of the UN Declaration on the Rights of Indigenous Peoples (UNDRIP), which guarantees indigenous peoples the right to determine priorities for the development or use of their lands or territories and other resources. It also mandates that states consult and cooperate in good faith with them in order to obtain their free and informed consent prior to the approval of any project – especially those connected with the development, utilization or exploitation of mineral, water, or other resources – and to provide redress for any adverse effects from development.

Not surprisingly, First Nations leaders and communities saw the Tsilhqot’in ruling (part of a longer-term trend for the courts to uphold indigenous rights) and the Liberal campaign promises as major victories. But their optimism was tinged with a realistic understanding that their struggles are far from over.

Within and among indigenous peoples and communities, there are a range of views over development issues. Cheam First Nation Chief Ernie Crey recently told a Reuters reporter that his community is not opposed to development, but they want their rights and needs to be treated with the same gravitas as those of other Canadians. Similarly, the Tsilhqot’in in central British Columbia have indicated that they would support mutually beneficial mining and resource projects in some parts of their traditional territories, but also that areas of special historical and cultural importance are simply off-limits.

Grand Chief Stewart Phillip of the Union of British Columbia Indian Chiefs recently stated that Justin Trudeau should keep in mind that the economic considerations of the oil industry do not outweigh aboriginal rights.

“Nothing has changed on our side of the equation. The answer is still ‘no’,” Grand Chief Phillip said when asked about Trudeau’s latest comments at a news conference in Montreal.

The Prime Minister told the media that his job is to look out for Canada’s best interests and not act as a “cheerleader” for pipeline projects as the previous Conservative government did. But he also indicated that his responsibility is to balance the economy and the environment. Trudeau said his government would announce a new review process for pipelines and other energy projects “shortly.”

Some deadlines are imminent, such as the federal cabinet’s final decision on Kinder Morgan by late this year. In the meantime, the old National Energy Board (NEB) appointed by former Conservative Prime Minister Stephen Harper is still dealing with TransCanada’s proposed Energy East pipeline, in the wake of revelations that TransCanada consultant Jean Charest, the former Liberal Premier of Quebec, met secretly with NEB panel members to discuss the application.

Similarly, Trudeau’s government has issued permits to the Site C mega-dam in northern British Columbia, even while First Nations challenge the project in court, and First Nations near Prince Rupert are preparing legal action and blockades of Lelu Island just as the Liberal government is preparing to approve or reject a Malaysian gas terminal.

All this is happening before the new government acts to carry out its promise of “a full review of regulatory law, policies, and operational practices” in full partnership and consultation with First Nations, Inuit, and Métis Peoples.

Clearly, the Trudeau government is backing away from its responsibility to carry out the letter and spirit of treaties and court rulings, and to implement the UNDRIP and the Truth and Reconciliation Commission’s recommendations. Will it yield to the pressures of the big energy monopolies which remain determined to expand the extraction and export of fracked gas and unprocessed bitumen from the Alberta tar sands?

The answer came in late September, when Ottawa gave conditional approval to the Pacific NorthWest liquefied natural gas project in British Columbia, claiming that the decision followed extensive studies on the project’s environmental impact, and after consultations with First Nations.

That argument was rejected by environmentalists and indigenous groups, who point out that the project would be one of the biggest greenhouse gas emitters in Canada, and pose huge potential risks for traditional communities along the coast.

The Liberals also admit that the groundwork for the project was laid by the previous Harper government. In response, UBC Prof. Sheryl Lightfoot, the Canada Research Chair in Indigenous rights and politics, warned that the government is damaging the cautious optimism held by Indigenous voters.

“It just confirms people’s deepest suspicions – that there actually is no change, and that the processes in place have just continued, and that the status quo of the Harper government is the underlying agenda of the Trudeau government,” she said.

Don Wesley, also known as Chief Yahaan of the Gitwilgyoots, part of the Tsimshian Nation, also called the news disappointing.

“We had a feeling this might come,” he told CBC Radio. “[But] my feelings as a First Nations person were that we were really slapped in the face by the announcement. All his talk in the past year here, and his campaign promises, you know – at least he [could] have had the common courtesy out of his office to give us an indication that this was coming. But there was nothing.”

The LNG project may yet falter, due to low energy prices worldwide, but a year after the federal election, it appears that the old colonial drive to maximize profits for resource corporations trumps the Trudeau’s lofty words about genuine reconciliation and justice for indigenous peoples.